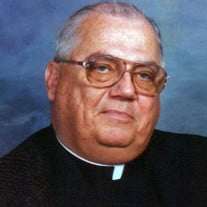 Rev. Lehr J. Barkenquest, O.S.F.S. passed away peacefully on January 4, 2019 at Rosary Care Center, Sylvania OH, at the age of 83. Fr. Lehr was born to Lehr and Neitha (Cox) Barkenquest on July 16, 1935 in Ottawa Lake, MI. He is survived by his sister Janice Ann Bragg of Bradenton, FL, nephews Norman, Timothy and Brian Bragg and niece Julie Blackwell, as well as six great nephews and three great-great nephews. Fr. Lehr graduated from Toledo Central Catholic High School in 1953. He entered the Oblates of St. Francis de Sales immediately following graduation and made his first Profession of Vows in September of 1954 and was ordained a priest on April 11, 1964. He earned an undergraduate degree in Mathematics from the Catholic University of America and did further graduate studies in both Mathematics and Theology. Fr. Lehr had a long career in Catholic education. He taught at Fr. Judge High School, Philadelphia, PA as a seminarian and immediately after ordination. In 1965 he was appointed teacher and treasurer of St. Francis de Sales High School, Toledo, OH. Four years later he was transferred to DeSales Catholic High School, Lockport, NY, where he served first as a teacher and then as the Principal. He returned to St. Francis-Toledo in 1988 as a teacher and administrator. He became pastor of St. Rita Parish, Clarklake, MI in 1991 where he served for 22 years. Both as Principal and School Treasurer Fr. Lehr was very concerned that all who wanted a Catholic education could receive it. He devoted countless hours building up tuition/scholarship funds in the schools where he ministered. His financial ability was furthered evidenced in his stewardship of St. Rita Parish in Clarklake and his pastoral generosity in his selfless dedication to his predecessor, Fr. Jim Prentice, during Fr. Jim’s final battle with cancer. Father Lehr also served many summers on the staff and in the leadership of Camp DeSales in Brooklyn, Michigan where he improved the various programs of the camp, the camp finances and the physical plant itself. Visitation will be held from 3:00-5:00 PM and 6:00-7:00 PM on Wednesday, January 9 at St. Rita Catholic Church, 10516 Hayes Rd, Clarklake, MI 49234. The Mass of Christian Burial will be celebrated on Wednesday, January 9 at 7 PM at St. Rita's. Private Interment will take place on Thursday, January 10 at Resurrection Cemetery, Toledo Ohio. In lieu of flowers, memorials may be made to St. Rita Catholic Church or the Oblates of St. Francis de Sales Retirement Fund. ??Coyle Funeral Home is assisting with arrangements. Please view and sign the online registry at CoyleFuneralHome.com.

Rev. Lehr J. Barkenquest, O.S.F.S. passed away peacefully on January 4, 2019 at Rosary Care Center, Sylvania OH, at the age of 83. Fr. Lehr was born to Lehr and Neitha (Cox) Barkenquest on July 16, 1935 in Ottawa Lake, MI. He is survived by... View Obituary & Service Information

The family of Rev. Lehr J. Barkenquest OSFS created this Life Tributes page to make it easy to share your memories.