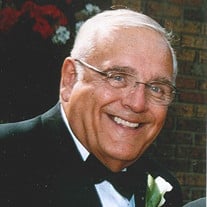 William “Bill” H. Winkle, 82, passed away peacefully at his home on June 1, 2017. He was born on December 9, 1934 in Toledo, Ohio to Herbert and Luella (Harrison) Winkle. Bill graduated from Waite High School in 1952. He proudly served his country in the U.S. Army in Germany from 1957-1959. Bill was appointed to the Toledo Fire and Rescue Department on August 23, 1963. He quickly moved through the ranks and became Chief of the Department on July 7, 1980, where he served for 10 years, retiring in 1990. He was active on many community civic boards. Bill was very athletic, and loved playing softball, basketball and football. He enjoyed being outdoors, hunting and fishing. Traveling with his wife through Europe and the United States was also a passion. After retirement, Bill and Janet spent their winters in Ponce Inlet, Florida, where they spent time with lifelong friends. Bill was an avid Ohio State Buckeye fan, traveling in his motorhome to many away games. Bill is survived by his loving wife of 44 years, Janet; children, Kris (Paul) Edler, Michele (Mike) Mackey, Brenda (Kemp) Johnson, Caryn (Gary) Salts, Eric (Amanda) Winkle, Sue (Greg) Tucker; grandchildren , Nicholas, Alexa, Brandon, Allison, Sarah, Kyle, Michael, Ava, Matthew, Lauren, and one great grandson, Sawyer. His brother George Winkle also survives. He was preceded in death by his parents, and his brother Robert Winkle. Bill was a caring person who would help anyone, friend or family. Friends may visit at the Coyle Funeral Home, 1770 S. Reynolds Rd. on Tuesday, June 6 from 2-8 p.m. with the Last Alarm Fireman Service at 7. The funeral will begin on Wednesday, June 7 at 10 a.m. in the funeral home, with burial at Toledo Memorial Park. Memorial contributions may be given to Hospice of NW Ohio or St. Clements Church. Please view Bill’s Memorial Video Tribute and leave a condolence message for the family at CoyleFuneralHome.com.

The family of William "Bill" H. Winkle created this Life Tributes page to make it easy to share your memories.

William “Bill” H. Winkle, 82, passed away peacefully at his home...

Send flowers to the Winkle family.