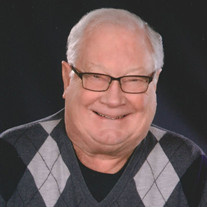 William R. Waters, age 75, of Maumee, Ohio passed away at home, on Monday, September 13, 2021, after suffering with asthma and COPD most of his adult life. He was born on October 25, 1945, in Toledo, Ohio to Alice V. (Pancoast) Waters and Robert P. Waters who both preceded him in death. After graduation from DeVilbiss High School he attended the University of Toledo and obtained his undergraduate degree in Business Administration. He went into public accounting and then entered the healthcare financial management field aided by obtaining his Certified Public Accountant (CPA) certificate. Later his wife Ann and he attended Tiffin University, where they graduated together with their Master's Degrees in Business Administration. His education and professional years were all spent living in the Toledo area. He spent over 15 years as the Assistant Treasurer of Flower Hospital, Lake Park Hospital and Crestview Club Apartments. While there he oversaw the financial planning, budgeting, financial reporting and reporting the operating results of each organization. Bill then had the opportunity to go to a larger healthcare system in Sylvania Ohio. It was with Franciscan Services Corporation (FSC) a division of The Sisters of St. Francis of Sylvania OH. Bill finished up his career spending over 25 years there as Vice President of Financial Services for the healthcare system. FSC managed acute care hospitals in Michigan, Ohio and Texas and retirement facilities and nursing homes in Ohio, Kentucky and Texas. While there he oversaw the long range financial planning process for the System, managed the debt structure, the budgeting process, and reporting on the financial results for the System. The System obtained an A- bond rating in 1987 and was able to maintain that until he retired in 2010. Bill served on several FSC boards and finance committees including Chairperson of Franciscan Care Center Sylvania and Chairperson of Madonna Manor a senior living community in Villa Hills, KY. He also was a long-standing member of the Preferred Professional Insurance Company of Omaha, NE, finance committee. During his career he was a member of different professional organizations, Financial Executives International (past President local chapter), Ohio Society of Certified Public Accounts, the American Institute of CPA's, the board of the University of Toledo Alumni Association, the Chairman of the Ohio Hospital Association Uniform Billing Committee (UB 16) and the American Hospital Association UB16 committee. He was one of two people selected to represent the American Hospital Association on the National UB16 Committee responsible for finalizing the design and implementation of the billing form. After being President of the local Healthcare Financial Management Association (HFMA) he was appointed to the national board of HFMA. Surviving Bill is his wife Ann, his two daughters Cynthia Coleman (Jeffrey) and Allison Baptist (Danny); Ann's/his daughter Wendy Kilbride (Ramon Razo Villalobos) and her/his son Ian Kilbride (Jennifer); all became a very close family mainly due to Ann's leadership. He had 8 grandkids from 4 to 19 years old, Nicolas, Aiden, and Chloe Kilbride, Jack, Will, and Maddie Coleman, Frankie and Gus Baptist. His biggest hobby was attending their sporting and other events, ranging from high school and college football, basketball, golf, tennis, dance, and soccer games up to 6 per week. In the summers the weekends were spent at the summer home on Vineyard Lake watching the grandkids swimming, skiing, tubing, riding the wave runners and rafting just like he did growing up spending summers at Vineyard Lake. In the winter he played hockey after school and on weekends at Walden Pond in Ottawa Park. He and Ann recently sold their winter home in Green Valley Arizona that they enjoyed for seven years from January to April. He always enjoyed playing golf up until a couple of years ago when his body could no longer allow him to play. He always enjoyed volunteering at the annual Marathon Classic tournament, (formerly the Jamie Farr) transporting the players during the week of the tournament. He and his wife Ann have had University of Toledo season football, men's basketball and women's basketball tickets for all the years they were married. As a couple they were very fortunate to have traveled throughout the United States and abroad during their 30 years of marriage. They took 8 members of their family to attend the summer Olympics in Atlanta. Bill and Ann also attended the winter Olympics in Salt Lake City. He was always an avid Detroit Red Wings fan and Tigers fan. The Sisters of St. Francis sent Bill to Assisi and Rome, Italy to study the Sisters' culture that was developed from St. Francis of Assisi and St. Claire of Assisi. This had a significant impact on his life and he went on to study and join the Catholic Church. He returned the second time joining Ann when the Sisters of St. Francis sent her to Assisi and Rome for the same Pilgrimage after which she renewed her membership in the Catholic Church. Friends may visit at the Coyle Funeral Home, 1770 S. Reynolds Rd. on Sunday, September 19 from 2:00- 7:00 p.m. with a Scripture Service at 6:00 p.m. The funeral will begin in the mortuary on Monday, September 20 at 10:00 a.m. followed by Mass at St. Joan of Arc Church at 10:30 a.m. Burial will be at Toledo Memorial Park. Memorial donations may be given to the Sisters of St. Francis, Sylvania, Ohio or the charity of the donor's choice. Please view Bill's video tribute and leave a condolence message for the family at CoyleFuneralHome.com. In memory of Bill, live every day of your life to the fullest as he did, with no regrets!

William R. Waters, age 75, of Maumee, Ohio passed away at home, on Monday, September 13, 2021, after suffering with asthma and COPD most of his adult life. He was born on October 25, 1945, in Toledo, Ohio to Alice V. (Pancoast) Waters and Robert... View Obituary & Service Information

The family of William Waters created this Life Tributes page to make it easy to share your memories.

Send flowers to the Waters family.