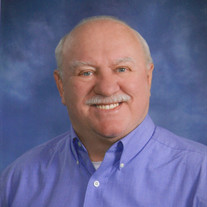 William J. O’Keefe, age 81, of Toledo, passed away at his home on Wednesday, September 25, 2019 surrounded by his loving family. He was born in Cincinnati, Ohio on September 19, 1938 to William H. and Lorraine (Fenwick) O’Keefe. He graduated from the University of Cincinnati with a Bachelor of Science in Pharmacy. He began a career working in retail pharmacy in the Toledo area. He was past president of the Toledo Academy of Pharmacy. He also served as an adjunct professor at the University of Toledo College of Pharmacy Retirement allowed him to pursue his interest in MAGIC. He was a member of The International Brotherhood of Magicians (IBM), The Society of American Magicians (SAM), and The Toledo Society of Magicians, Ring 68. He was a member of St. Patrick of Heatherdowns Church. He served as a Eucharistic Minister taking communion to “homebound” parishioners. Left to cherish his memory is his wife of 34 years, Mary; children, Kathleen Yaros; Timothy (Holly) O’Keefe of Hebron, KY; step-children Laura Neal of Harker Heights, TX; Steven (Sara) Wells and David (Andrea) Wells; Grandsons Connor and Logan O’Keefe; step-grandchildren Christopher Neal, Zachary, Tayler, and Brandon Wells; brother John (Nancy) O’Keefe of Cincinnati, OH, brother-in-law Carl Beckman; as well as nieces, nephews, and friends. Bill was preceded in death by his parents; Ann, his first wife and mother of his children, son Andrew O’Keefe, and cousin Fr. Robert Hunt. The family would like to thank a very special friend, Pattrick Przysiecki, for his many visits, laughs, and “magic” conversations. His compassionate concern for Bill was a blessing beyond measure. Friends may visit at the Coyle Funeral Home, 1770 South Reynolds Road, on Tuesday, October 1, from 2:00-8:00 p.m. with a prayer service at 7:00 p.m. The funeral will begin in the mortuary on Wednesday, October 2, at 9:30 a.m. followed by the Funeral Mass in St. Patrick of Heatherdowns Church at 10:00 a.m. Burial will be at Toledo Memorial Park. The family requests, in lieu of flowers, that memorial contributions be made to St. Patrick of Heatherdowns or Hospice of Northwest Ohio. Please view and sign our online “guest registry” at CoyleFuneralHome.com

The family of William J. O'Keefe created this Life Tributes page to make it easy to share your memories.

Send flowers to the O'Keefe family.