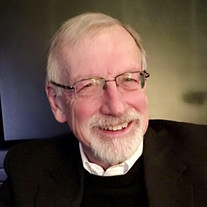 Dr. William Earl McMillen, Ph.D., passed away suddenly on Friday, November 23, 2018 at the age of 70. He remains ever-poised at the first tee, in his Green Bay Packers golf sweater, awaiting the perfect round of golf, finally capturing the elusive drive that goes on forever. Bill was known for his intellect, congenial nature, and collaboration. Dr. McMillen held a Ph.D. in English from Ohio University (1976); a Master's degree in English and Creative Writing from Ohio University (1972); and a Bachelor's degree in English from University of Wisconsin at Stevens Point (1969). Bill had a long, successful career. He retired from the University of Toledo (UT) in 2013 and subsequently served on the Unison Health board as well as several Northwest Ohio mental health and social services boards. From 2010-2012 he served as Provost and Executive VP of Academic Affairs at University of Toledo. Bill also served as the VP of Governmental Relations and Chief of Staff in the Office of the President. Bill was responsible for overseeing legislation in the General Assembly that changed the name of MCO to the Medical University of Ohio (MUO). While serving in a joint role as VP of Governmental Relations for both the MUO and UT, Bill played a key role in guiding the merger through the legislature. Assuming a leadership role at the new, merged University of Toledo, he worked on strategic planning, sustainability, economic development, and relations with the Ohio Board of Regents. Bill was a published author in both fiction, “Sticks" and non-fiction, “From Campus to Capitol.” In addition, he self-published a series of Christmas books which were privately distributed to friends and family. Sadly, Christmas Pines and Pico Press will receive no further installments. More recently, Bill was a playwright working with Toledo Repertoire Theatre “First Do No Harm", and worked closely with the Glacity Theater Collective, who performed his play “Exhibition.” A prolific writer, Bill leaves behind shelves of unpublished manuscripts, each from 50 to 800 pages, in various genres from Plays, Historical Fiction to Sci-Fi. Before his sudden passing, he was passionately working on the play “Mrs. Piper” that someday will be performed in honor of his memory. Bill was always jotting down interesting little details that would later be woven into robust characterizations. One of Bill's most endearing qualities was his record-keeping and especially the family notebook in which he recorded every family event in detail. This notebook memorializes our lives together and this keepsake will be forever treasured. Bill loved travel, which provided a constant source of fresh material. One of the highlights of Bill and Barb's years in graduate school was a two-month trip to Europe during the summer of '71 when they backpacked through 11 countries. Throughout their lives, they traveled extensively throughout the U.S., Europe, and Australia, often joined by Barb’s youngest sister and family confidant, Kathryn Fialkowski. They frequented Philadelphia for Barb's family traditions like the Mummer's Parade. They especially cherished summer trips to the Grauman’s lake house in Glen Arbor Michigan. Bill loved his family. He was a terrific husband, father, grandfather and an excellent manager of family affairs. In January 1970, Barb and Bill married while in Graduate school in Athens, Ohio after only 4 months of dating. In September of 1976, Barbara and Bill moved to Bowling Green, Ohio, with their one-month old son Christopher. On Thanksgiving 1981, Barbara and Bill adopted a second son, Mark, who was nearly four when he came to live with his new family. Barbara and Bill moved to Perrysburg, Ohio in the summer of 1984. Christopher attended Perrysburg schools before enrolling in and graduating from St. John’s Jesuit High School. Mark attended Perrysburg schools and graduated from Perrysburg High School. Though from Wisconsin and Pennsylvania, Perrysburg became home and Bill and Barb had a wonderful life here. Bill was preceded in death by his parents Robert Earl McMillen and Marion Christina (Mackenzie) McMillen, stepmother Mildred and tragically (5 months ago), his wife Barbara Ann (Fialkowski) McMillen. He is survived by his son Christopher with wife Aleksandra and grandson Vuk and his son Mark and granddaughters Marissa and Sierra. He is also survived by his cousins: Bonnie (John) Sorenson, Wauwatosa, WI; Lynn Loewen, Racine, WI; Roberta (“Bird” and Ray) Bost Burgaw, N.C.; and Debra Loewen, Ixonia, as well as Mary Lou (Delmar) Byers of Oxford, WI. The family wishes to especially thank Vern Snyder and Art (Hazel) Rossi who knew that Bill would never miss a tee time and sounded the alarm ensuring Bill was immediately surrounded with love and caring attention. Heartfelt thank you to the Mahood family for taking in Bret, Bill and Barb’s beloved English Setter. Many thanks to dear friends Karen and Bob Grauman, Liz Perozek, Judy and Paul Belazis, Marijo and Ron McGinnis, and so many others that are helping us through this tragedy and a year of unfathomable loss. It is a testament to our parents’ lives that they are so well remembered and loved. Our sincere thanks to all. The family invites family, friends, and neighbors to join them in a celebration of Bill's life, on Thursday, February 28thfrom 3-5 p.m. at Coyle Funeral Home, 1770 S. Reynolds Rd. Interment will be private. In loving memory of Bill, please consider making a donation to his personal charity of choice, The University of Toledo Foundation (https://www.utfoundation.org/give/giveonline.aspx), College of Arts and Letters general scholarship fund #2401950. The Coyle Funeral Home is assisting the family with arrangements. Please leave a condolence message at CoyleFuneralHome.com.

Dr. William Earl McMillen, Ph.D., passed away suddenly on Friday, November 23, 2018 at the age of 70. He remains ever-poised at the first tee, in his Green Bay Packers golf sweater, awaiting the perfect round of golf, finally capturing the... View Obituary & Service Information

The family of William Earl McMillen created this Life Tributes page to make it easy to share your memories.

Send flowers to the McMillen family.