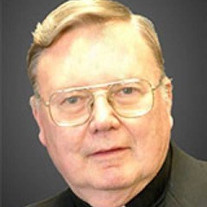 Rev. William F. Fisher, O.S.F.S. passed away on August 30, 2021 at Flower Hospital, Sylvania, OH, following a long illness. Fr. Fisher was born to William and Mildred (Stengel) Fisher in Philadelphia, PA on September 2, 1933. He is survived by his brother, Robert F. Fisher and sisters, Miriam Bryant and Geraldine Flail. In 1951 Fr. Fisher graduated from the Oblate High School in Philadelphia, Northeast Catholic and immediately entered the Oblate novitiate in Childs, MD. He made his first profession of vows as an Oblate on September 14, 1952. He earned a degree in philosophy from Catholic University in Washington, DC in 1958, followed by theological studies in Washington. He received a MA in English at Catholic University in 1967. Fr. Fisher was ordained a priest on June 3, 1961. Following ordination, Fr. Fisher taught at his alma mater, Northeast Catholic from 1962-64, and St. Francis de Sales High School in Toledo, OH 1965-1979. He then began his career as a pastor, first at St. Paschal in Taylor, MI 1979-1993 and then at St. Joseph and St. Anne Parishes in Monroe, MI 1994-2013. In 2014 he entered senior status as an Oblate of St. Francis de Sales in residence at St. Francis de Sales High School, and in 2017 moved to Rosary Care Health Care Center in Sylvania, OH. In addition to his priestly ministry Fr. Fisher was involved in civic duties, serving on the Monroe Parks and Recreation Commission for six years and as Commissioner of Parks and Recreation in Taylor, MI for three years. Fr. Fisher was an avid opera buff and was a member of the chorus of the Toledo Opera Company and the Lyric Opera of Toledo, serving as vice-president and a founding member. A second tenor, he performed in nearly 70 productions and 30 operas and operettas. He sang in the chorus with Placido Domingo, Robert Merrill and Roberta Peters. Fr. Fisher is quoted as saying, "I don't have a good voice. But I have a large voice, and I can read a little music. I fit right into the chorus." He also loved to travel and visited over 35 countries on five continents. He journeyed on African safaris, through the Sahara Desert, vacationed in the Galapagos Islands, and flew over Mount Everest in Nepal. Visitation is scheduled for Wednesday, September 8, 2021 from 4:00 - 4:45 p.m. followed by the Mass of Christian Burial at 5:00 p.m. at Gesu Church, 2049 Parkside Blvd., Toledo, OH 43607. Interment will be at 10:00 a.m. on Thursday, September 9, 2021 at Resurrection Cemetery in Toledo. Donations in memory of Fr. Fisher may be made to the Oblates of St. Francis de Sales, PO Box 2868, Toledo OH 43606 Please view and sign the online registry at CoyleFuneralHome.com

The family of William Fisher created this Life Tributes page to make it easy to share your memories.

Send flowers to the Fisher family.