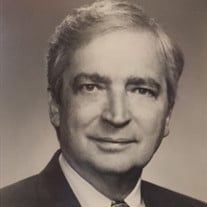 William C. “Bill” Coyle, 86 years, of Holland, OH passed away Tuesday Feb. 11, 2020 at Toledo Hospice of NW Ohio. Bill was born Feb. 17, 1933 and was the oldest of 8 children born to William and Lillian (Held) Coyle. He graduated from Central Catholic High School and obtained a degree in music from Bowling Green State University. He served two years in the U.S. Army, playing in the U.S. Army Band. (When asked by the US Army if he played an instrument, he replied: “Which one do you need?”) Bill graduated from the Cincinnati College of Mortuary Science, and following in the footsteps of his father, grandfather and great-grandfather, Bill became a funeral director in the family owned business, James Coyle and Son Funeral Home. He worked alongside his father, his Uncle Jim Coyle and brother, Joe Coyle, eventually rising to the position of owner and president, retiring in January, 1999. He was a member of the Toledo Lions Club for over thirty years. Bill passion in life was music. He was a renowned bassist, playing at local and regional venues, including Rusty’s Jazz Club. Bill played violin for the Bowling Green Symphony Orchestra for decades. He enjoyed attending the yearly International Jazz Festival in England. His love of Jazz, specifically Stan Kenton was legendary. Bill is mentioned repeatedly in Art Tatum’s biography as the Stan Kenton “aficionado. “ Surviving are his beloved wife, Leta, children: Christopher (Catherine) Coyle, Kevin Coyle, Jennifer (Seth) Coyle-Goldstein and Laura (Mike) Heenan and eleven grandchildren. Bill’s siblings are James (Maureen), Mike (Bridget), John B. (Irene), Joe (Bonnie), Ned (Therese) Coyle and Kitty Doherty. His stepchildren, Melinda (Spencer) Housch, Brad Dority, Jill Little and Chris Klueter also survive, along with numerous nieces and nephews. He was preceded in death by his sister Mary Ann Egli. Bill’s family would like to thank the US Renal Dialysis, Wolf Creek Rehab and the Toledo Hospice of NW Ohio for the extraordinary comfort and the care he received. Friends may visit at the Coyle Funeral Home, 1770 S. Reynolds Rd. on Saturday, February 15, beginning at 11:00 a.m. until the time of the funeral service at 3:00 p.m. Interment will be private. Memorial donations may take the form of contributions to the Toledo Jazz Orchestra www.toledojazz.org or the North Carolina Yorkie Rescue Organization www.ncyorkierescue.net where Bill adopted his much-loved Yorkshire Terrier, “Bentley”. Please view Bill’s memorial video tribute and leave a condolence message at CoyleFuneralHome.com. “The flame flutters, the sparks dim, but the spirit rises to the heavens and bursts into eternal memories that lives in our hearts forever”

The family of William Conan Coyle created this Life Tributes page to make it easy to share your memories.

Send flowers to the Coyle family.