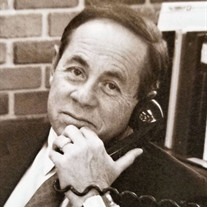 Bill Cassidy, Pops, Daddio, Papa, Uncle Bull, Cass, Uncle Bill and friend to so many, of South Toledo passed on to be with the Lord on Tuesday, November 20,2018. He was born in South Toledo on November 2, 1933 to Peter and Betty Cassidy Bill was a graduate of Toledo Central Catholic in 1952 and an avid supporter of Notre Dame Athletics. He was a proud veteran of the US Army who served bravely fighting many battles stateside on leave in forward territories such as New Orleans during his service. He was the man with a story, the quick joke, a hearty smile, a sense of humor that was his trademark and an uplifting comment when you were in need. A man that would be known as the candy man at many local hospitals where he would bring candy for all the health professionals, as he spent hours fighting his health battles and caring for his ailing wife. The man loved to talk, and to anyone that he met. He always wanted to know if you were from Toledo, and where you went to High School. He loved his Alma Mater Central Catholic High School and was an avid listener on Friday nights to the Irish. He was very proud of his Irish Heritage and was not shy about making it known. Bill was a consummate honest salesman with a work ethic like no other. For the majority of his career he spent selling cars beginning with Bob Eddy Buick, Walt Pierce, George Ballas, and made a family with the Taylor Automotive Group. Everyone knew to call Bill Cassidy if you needed a Buick. He loved golf, and spending his Sundays watching football and sharing these passions with his family. He loved a good party, his basement, his friends, his family and definitely his beer. If you were a friend of his, you were a friend forever, and he always had your back. He was also a member of St. Patrick of Heatherdowns Parish for over 45 years. He was preceded in death by his wife Faye, his daughter Deb, his sister Peg, his father Pete and mother Betty .He is survived by his son Bill, his daughter in law Kathy, granddaughter Tori, his big brother Jim Cassidy as well as many nieces, nephews, cousins, and friends. Friends may visit at the Coyle Funeral Home, 1770 S. Reynolds Rd., on Sunday November 25th from 2-8 pm. where a Scripture Service will be held at 7 pm. Funeral services will be held on Monday November 26th beginning at 9:30 am.in the mortuary followed by the Funeral Mass in St. Patrick of Heatherdowns Church at 10 am. Interment will follow in Resurrection Cemetery. Memorials may take the form of contributions to Central Catholic High School or to the American Cancer Society.

Bill Cassidy, Pops, Daddio, Papa, Uncle Bull, Cass, Uncle Bill and friend to so many, of South Toledo passed on to be with the Lord on Tuesday, November 20,2018. He was born in South Toledo on November 2, 1933 to Peter and Betty Cassidy Bill... View Obituary & Service Information

The family of William Charles Cassidy created this Life Tributes page to make it easy to share your memories.

Send flowers to the Cassidy family.