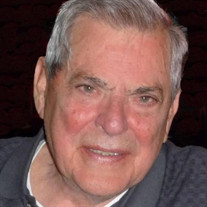 WILLIAM A. BRUECKEN William A. Bruecken, 87, died June 23, 2020 at his home in Laguna Woods, Ca. after a courageous battle with lymphoma. The son of Mary Magdalen and Dr. Albert Bruecken, he was born January 17, 1933 in Pittsburgh, Pa. Bill graduated from the University of Pittsburgh with an engineering degree, and later served in the US. Army as an engineer for 2 years. Bill was married to the love of his life, Donna for 49 years until her passing in 2003. The family moved from Pittsburgh to Toledo in 1971, Bill resided there until 2006. Bill was employed with Surface Combustion Div- Midland Ross Corp. for 30 years until retirement in 2001. Bill has had a strong Catholic faith and was an active parishioner at Our Lady of Perpetual Help Church in Toledo. In 2006 Bill moved to Laguna Woods, Ca. Bill was known for his passionate smile and contagious laughter as he was always surrounded by friends and family on his infamous porch. His love of nature including trees and his hummingbirds is just a part of what made him so special and caring. Bill is survived by his daughter Sue Holden (Jim), sons William Jr. (Amy), Thomas (Jackie), Douglas (Teresa) and sister Claire McFadden. Grandchildren Sean (Nora), Nicholas (Audra), Shelby Calvin (Evan), Andrew (Samantha), Brandon (Tess), Heather, Hailey, Devin, and Faylyn. Great grandchildren Breckin, Greer, Landen and Summer. Bill was proceeded in death by his wife Donna, son Eric, and siblings, Thomas, Albert, Robert, James, and Jean. A Memorial visitation will held at the Coyle Funeral Home, 1770 S. Reynolds Rd. on Saturday, August 15th from 9-11, with a Memorial service at 11. Interment will be in Resurrection Cemetery with military honors. In lieu of flowers, please make any contributions to your preferred cancer foundation. Please leave a condolence message for the family at CoyleFuneralHome.com.

WILLIAM A. BRUECKEN William A. Bruecken, 87, died June 23, 2020 at his home in Laguna Woods, Ca. after a courageous battle with lymphoma. The son of Mary Magdalen and Dr. Albert Bruecken, he was born January 17, 1933 in Pittsburgh, Pa. Bill... View Obituary & Service Information

The family of William A. Bruecken created this Life Tributes page to make it easy to share your memories.

Send flowers to the Bruecken family.