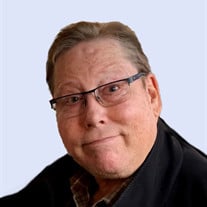 Wearing one of his colorful Hawaiian shirts from his vast collection, Bill Robison entered the larger life, surrounded by the love of his family and friends, and supported by the superb nursing care of Hospice of Northwest Ohio, Perrysburg, on March 22, 2022. Bill was born in Toledo, Ohio on December 14, 1953 to Mary Hubbard Robison and James Jacobs Robison. He grew up in Ottawa Hills and attended Salisbury School in Connecticut. From a very early age, Bill demonstrated an interest in all things relating to sound and turned everything he could get his small hands on into a microphone. His first successful venture into the Northwest Ohio music community was as a live sound engineer for numerous local bands. He went on to found Great Lakes Sound and Light in 1985 and served as president until his retirement in 2018. He was supported by his dear friends and colleagues Todd and Julie Mitchell and has always been revered by his many, many friends in the entertainment community, ranging from musicians, to sound and lighting technicians, stage-hands, and promoters who have cherished Bill's friendship, generosity, honesty, and sharp, sarcastic wit. Over the years in the sound and lighting business, Bill worked thousands of events. He had the opportunity to work with several of our nation's Presidents and Presidential candidates. He earned a Certificate of Appreciation from The White House Communications Agency for his outstanding abilities, attitude and professionalism which enabled the agency to provide critical communications for the President and White House Staff. A proud lifelong Toledoan, Bill was instrumental for events such as the Party in the Park and the Rally By the River series in the late 1980's and 90's, providing audio, lighting and consulting services. His success and dedication allowed Great Lakes Sound, Inc. to provide meaningful employment opportunities for hundreds of people over the years through the current day. Bill was very customer-oriented and always went out of his way to provide "value added service" to his clients. Bill loved to travel, Hawaii always a frequent and favorite destination. He loved sharing odd facts and figures regarding airport runways, population, parking lots and parking garage capacity, and all things Steely Dan! He was a great music and movie lover and had a remarkable collection of books, vinyl, and discs that would rival any library. Bill was a true friend who would do anything to help friends, family and employees at the drop of a hat. Bill's ancestors were implemental in the settlement of the Midwest in the 19th century. His ancestor, Thomas Hunt, was commissioned a Captain by George Washington in 1791 and served as commander of Fort Wayne, and Fort Mackinac as well. In 1803 Colonel Hunt built Fort Industry, considered the site of Toledo's founding. The Robison family arrived in Toledo again in 1870 and purchased the horse drawn street car line in Toledo which evolved into the first completely successful urban electric railway in the world. Bill's great-great-grandfather, David Robison, oversaw the evolution of skyscraper design on Toledo's Madison Avenue constructing the Ohio Building in 1906 and the Owens Illinois Building in 1929-30. Throughout his life, Bill assembled an eclectic group of chosen family and friends and was a good friend to many. This is a testament to his generosity of spirit in his willingness to share his knowledge, skills, time, talents, and opinions with others. Those who mourn his passing are in the hundreds. Bill touched the lives of many during his time on earth and we will never truly know how many people he touched throughout his life. Bill is survived by his sister, Eleanor Seymour Robison, San Francisco, his niece, Anita Greer Kasch, and nephew, Edward Jacobs Kasch, both of Oregon State. A Celebration of Life for Bill will be held on April 3, 2022 at the Valentine Theater from 1pm - 5pm. Doors will open at 12:15 and the service starts at 1pm. There will be food, beverages and entertainment. Memorials may be made to Hospice of Northwest Ohio, Wood County Committee on Aging, Toledo Buffalo Soldiers MC, Inc. The Coyle Funeral Home is assisting the family with arrangements. Please view the online guest registry at CoyleFuneralHome.com.

Wearing one of his colorful Hawaiian shirts from his vast collection, Bill Robison entered the larger life, surrounded by the love of his family and friends, and supported by the superb nursing care of Hospice of Northwest Ohio, Perrysburg,... View Obituary & Service Information

The family of Willard Denison Robison created this Life Tributes page to make it easy to share your memories.

Wearing one of his colorful Hawaiian shirts from his vast collection,...

Send flowers to the Robison family.