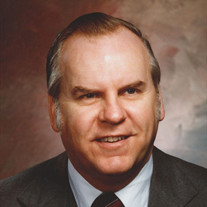 Wendell A. Johnson The family of Wendell Johnson sadly announce his passing on April 28, 2019. Wendell was born March 29, 1927 in Grove City, Minnesota to Arthur and Helen (Andersen) Johnson. He spent his youth on the farm in Minnesota and always cherished his memories of this time of his life. He graduated from Litchfield High School in 1944, and enlisted in the Navy. He served in the Pacific, bringing soldiers home from China and the Philippines. After World War II, he used the GI bill to enroll at the University of Minnesota. He graduated with a degree in Electrical Engineering in 1949. He accepted a job with the Toledo Edison Company, where he met the love of his life, Joyce Smith. After a brief courtship, they married on Sept 9, 1950. Some said it wouldn’t last, but their marriage lasted 68 years. In 1952 Wendell was drafted into the Army for the Korean War. He served two years at Aberdeen Proving Ground, until the end of the conflict. Wendell achieved great success in his career with the Edison, including holding the positions of Vice President of Customer Services, Senior Vice President of Operations, Executive Vice President, President and COO of the Edison. He also served on the board of directors, and worked closely with the nuclear consultants in the planning of Davis-Besse. During his active career with the Edison, he found time to earn a Master’s Degree from the University of Toledo. He retired in 1985, and really began enjoying his life with Joyce. They enjoyed travel, visiting many European countries, and taking many cruises. Wendell also enjoyed golf, reading, and singing in the church choir. He was a lifetime member of Memorial Lutheran Church. Wendell was a member of the Institute of Electrical and Electronic Engineers, the Toledo Area Chamber of Commerce, the Toledo Humane Society, and board member of the Greater Toledo Area Chapter of the American Red Cross and the Toledo Opera Association. He was also awarded the highest honor by the Toledo Rotary. He is survived by his wife Joyce, daughter Linda (Bill) McCall, grandchildren Steven (Kara) McCall and Maria McCall, five nieces and nephews and two great-grandchildren. Wendell was preceded in death by his parents, son Paul and brother Duane Johnson. Friends and family are invited to a visitation on Thursday May 2nd from 4 to 7 pm at Coyle Funeral Home 1770 S. Reynolds Rd. The funeral service will be held Friday at 11am, also at Coyle Funeral Home. Interment will follow at Toledo Memorial Park. The family would like to thank the staff at Ohio Living Swan Creek who took good care of dad in his final days. Please view and sign the guest registry at coylefuneralhome.com.

Wendell A. Johnson The family of Wendell Johnson sadly announce his passing on April 28, 2019. Wendell was born March 29, 1927 in Grove City, Minnesota to Arthur and Helen (Andersen) Johnson. He spent his youth on the farm in Minnesota and... View Obituary & Service Information

The family of Wendell Arthur Johnson created this Life Tributes page to make it easy to share your memories.

Wendell A. Johnson
The family of Wendell Johnson sadly announce...

Send flowers to the Johnson family.