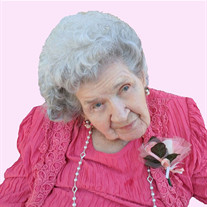 Virginia L. Pifer passed away on Monday, May 14, 2018, at the age of 99. She was born on August 5, 1918. Her parents were C.C. and Sarah Trackler of Williamstown, Ohio. She graduated from Arlington High School in 1936, having served as accompanist for musical groups, studied voice, took piano and marimba lessons, and was the fastest typist in her class. She married Harold A. Pifer, a classmate, on June 18, 1937. They spent 48 years together until January 5, 1985 when Harold passed away. They lived in Lima during those years with Virginia becoming involved in many activities. She was a charter member of the Westwood Garden Club, and won many awards for her flower arrangements. They were both very active in the Lima Senior High Band Parents organization, working at every basketball and football game concession stands for nearly ten years. They were both members of Elm Street Church of the Brethren serving as Sunday School teachers, deacons, and Virginia often chaired banquet committees. She was the presiding judge for many elections in Allen County. She was an active member of La Sertoma , and continued to arrange for the gals to meet monthly for dinner, even after she moved to Toledo. Also, she arranged annual reunions with her high school class of 37 students until there were only three left. Virginia loved to play cards, especially pinochle, shop, visit garage sales, shop, eat out, shop, and travel South. As long as there were malls in the area, she was happy. She knew the malls from Toledo to Orlando, FL. Virginia started working at The Leader Store in Lima, and then when the Lima Mall was built she transferred there and worked at Elder Beerman, as the manager of the ladies coat department for 40 years. She retired when she was 86 years old, and then only because she needed a knee replacement. Since Harold and Virginia each grew up on farms, even though they now lived in the city, they still had a love for the country. So, they purchased some land on Route 68, near Williamstown, Ohio, planned it like a park (he planted a forest and she planted flowers.) They called it their “farm”. Actually, since they both had full-time jobs in Lima, they named it the “2BZ2” Farm. (Translated – Too Busy To Farm) That “farm” brought them many joys thru the years. During the summers of 2006 thru 2011 Virginia and Jeanene spent 2 weeks each year attending the Ben Speer’s Stamps/Baxter School of Music, in Nashville and Murfreesboro, TN, studying Southern Gospel Music –focusing on harmony, ear training, writing music, sight reading, and ultimately making a CD. Virginia always had a heart for less fortunate people. She often visited nursing homes and individuals who were alone to bring joy and encouragement. She willingly gave clothes and food to those in need. She is survived by daughter, Jeanene Pifer, Toledo, Ohio, son, Jan (Cheryl) Pifer, Arlington, Ohio, granddaughter, Jennifer (Brad) Sites, Marysville, Ohio, and great grandson, Carter Sites, Marysville, Ohio. Preceding her in death were her parents and husband. Services will be at Coyle Funeral Home, 1770 S. Reynolds Rd., Toledo, Ohio 43614. Visitation will be Friday, May 18, 2018 from 2:00 – 8:00 PM. The funeral service will be Saturday, May 19, 2018 at 11:00 AM, with one hour of visitation prior to the service. Interment will be in the Eagle Creek Cemetery, 9210 Co. Rd.304, Forest, Ohio, 45843. Officiants will be Rev. Paul Myers, Fostoria, Ohio, and Rev. Laura Bensman, Toledo, Ohio. The family requests that donations be given to the Kidney Foundation or Genacross at Wolf Creek, 2001 Perrysburg-Holland Rd., Holland, Ohio 43528, where she enjoyed living the last five years. Please leave a condolence message for the family at CoyleFuneralHome.com.

Virginia L. Pifer passed away on Monday, May 14, 2018, at the age of 99. She was born on August 5, 1918. Her parents were C.C. and Sarah Trackler of Williamstown, Ohio. She graduated from Arlington High School in 1936, having served... View Obituary & Service Information

The family of Virginia L. Pifer created this Life Tributes page to make it easy to share your memories.

Send flowers to the Pifer family.