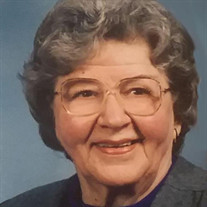 The vivacious Verena Mary (Kirsch) Bartholomy was born March 4, 1923 on a farm near Kingsley, Iowa during a blizzard. Her mother always said that she acted like that blizzard. Fittingly, the day after she died, October 18th, there was a freak snowfall of 9 inches in Iowa. Her parents were born in Luxembourg, and in that country the eldest son always inherits the farm. Unfortunately, her father was the second son, so, her parents emigrated shortly after World War I to be married and buy a farm. Luxembourgish was Verena's first language, and she was her mother's primary teacher of English. When you read a letter from her mother, you knew that her teacher was a child. In spite of the objections from her old school parents who thought education would be wasted on a girl and had plans for her to marry the old, widowed farmer down the road, Verena graduated from Blissfield High School in 1942. She saved her money from working in a WWII factory and graduated as an RN from Mercy College in Jackson, Michigan. Her next rebellious act was to marry James Jules Bartholomy in 1948, who was a city slicker from the metropolis of Adrian, Michigan. Their loving marriage lasted 53 years until his death in 2002. She worked as head nurse on 2 East in Mercy Hospital for many years and was known as Mrs. B. She was known for her exacting standards of care and was greatly loved by those who worked with her. She finished her working years in the office of Doctors Sundermeyer and Mendoza. Besides her husband, Verena was proceeded in death by her parents, Theodore and Elsie Kirsch, siblings Pierre, Gilbert, Dorothy, Gordon and Florentine; son, Mark Theodore and his wife Karla Hurst Bartholomy, daughter-in-law, Monica Ammons Bartholomy, son-in-law, Jack Dowling, and grandson Jeremiah Valiant. She is survived by her children who will miss her dearly, Deanna Malohn, Joseph Bartholomy, Gregory (Phyllis) Bartholomy, Ann Kear, Eileen (John) Juvinall, Rita (Donald) Shepler and Peter (Marchelle Myrice) Bartholomy. Her sister-in-law, Beverly Kirsch also survives along with Verena's 16 grandchildren and 14 great-grandchildren with more on the way. The family wishes to greatly thank ProMedica Hospice, and Wanda, her Hospice nurse, and especially Wotring Home for the wonderful care given to our mother during her last months. We will be forever grateful for having our mother in a home where we could visit and touch her freely (with proper PPE) and be with her during her final hours. Family and friends can visit at Coyle Funeral Home 1770 S Reynolds Rd. from 4- 8 p.m. on October 29th with a Rosary service at 7 p.m. and memory sharing immediately thereafter. Her funeral Mass will be celebrated at 11 a.m. on October 30th at St. Charles Borromeo Catholic Church where the family will greet guests starting at 10:00 a.m. Interment will be at Resurrection Cemetery. Proper COVID rules will be followed. This would have been Mom and Dad's 72nd wedding anniversary. Finally, they are together again. Donations can be made to St Charles Church, ProMedica Hospice or a charity of the donor's choice. Please leave a condolence message for the family at CoyleFuneralHome.com.

The vivacious Verena Mary (Kirsch) Bartholomy was born March 4, 1923 on a farm near Kingsley, Iowa during a blizzard. Her mother always said that she acted like that blizzard. Fittingly, the day after she died, October 18th, there was a freak... View Obituary & Service Information

The family of Verena Mary Bartholomy created this Life Tributes page to make it easy to share your memories.

Send flowers to the Bartholomy family.