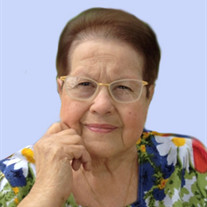 Vendura "Dolly" Vitale August 17, 1931-March 6, 2021 Our mother, our grandmother, our aunt, our teacher, our friend Vendura Mary (Rotondo) Vitale passed away on Saturday, March 6 in her home at the Waterford at Levis Commons in Perrysburg. She was 89 years old. Known most of her life as "Dolly," she was born on August 17, 1931, in Toledo. She was the sixth of seven children born to Laura and Frank Rotondo and the first to be born in the United States after her family emigrated from Bari, Italy. After graduating from Libbey High School in 1949, Dolly enrolled at the University of Toledo, where she met James Vitale, another first-year student from Jersey City, N.J. They married on May 30, 1953, and were true partners for 38 years until his death in December 1991. Although she lost her father when she was 8 and her mother when she was just 18, Dolly was one-half of a great parenting duo. And while raising five children, she returned to the University of Toledo as an education major and earned her bachelor's degree in 1974. She taught for 17 years in Washington Local Schools, at Horace Mann Elementary and Jefferson Junior High. She helped inspire a daughter, three grandchildren and several nieces and nephews to become teachers. Mom is survived by her five children: Rosanne (David) Florea, Frank (Kathy Beck), James Jr. (Julie), Patricia (Emile) Mahanti, and Bob (JJ Crisostomo). Grandma, also known as Granny and Macaroni, is survived by her 10 grandchildren-Jessica Florea and David (Caitlin) Florea; Sean (Jennifer) Tracey, Heather (Dominic) Millheim, and Nathan Vitale; Sarah (Matt) Long, Alison (Steve) Weiss, and Gabrielle Vitale; Ravi Mahanti and Deven Mahanti-and 11 great-grandchildren. Aunt Dolly is survived by many nieces and nephews. In addition to her husband and parents, Dolly was preceded in death by her brothers and sisters: Nick (Virginia) Rotondo, Serafina (Nick) DiLorenzo, Frank (Alice) Rotondo, Chiara (John) Sturniolo, Anna (Joseph) Restifo, and Catherine (Sam) Arite. Dolly was proud of her family and her heritage, and she passed on Italian traditions, proverbs and cooking skills to three new generations. She lives in our hearts and fond memories. Coyle Funeral Home is assisting the family with arrangements. Please leave a condolence message for the family at CoyleFuneralHome.com. "Her jewel-like eyes reflect her brilliant mind. Her great ambitions cannot be confined." --1949 Libbey High School Edelian.

Vendura "Dolly" Vitale August 17, 1931-March 6, 2021 Our mother, our grandmother, our aunt, our teacher, our friend Vendura Mary (Rotondo) Vitale passed away on Saturday, March 6 in her home at the Waterford at Levis Commons in Perrysburg.... View Obituary & Service Information

The family of Vendura Vitale created this Life Tributes page to make it easy to share your memories.

Send flowers to the Vitale family.