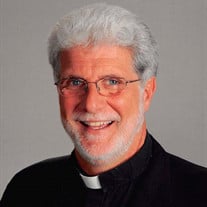 On Saturday, December 15, 2018, Father Anthony (Tony) A. Borgia, 61, passed away doing what he loved most...being part of a parish family event. Born on March 16, 1957 to Rose (Skinn) (Borgia) Riedy and James V. Borgia in Norwalk, Ohio. He graduated from St. Paul High School in 1975. After graduation he worked in Sandusky at Barone’s Beer Barrel as a cook and a bartender. He entered the seminary at St. Gregory’s in Cincinnati in 1976 and studied theology at Mount St. Mary’s Seminary of the West, Cincinnati. Ordained a deacon in 1983, he served for a year at Findlay, St. Michael’s. He was ordained a priest on June 9, 1984; his first assignment was as an associate pastor of St. Patrick of Heatherdowns. In 1986, he was assigned to the Diocesan Youth Office serving as Spiritual Director of Youth, Chaplain of Scouting, Associate Director of CYO and Director of Youth Ministry. He served as Pastor of Galion, St. Joseph from 1993-2000; Fort Jennings, St. Joseph and Ottoville, Immaculate Conception from 2000-2005; St. Peter’s, Mansfield from 2005-2011; St. John the Baptist, Point Place and St. Michael, Toledo from 2011-2015. In July of 2015, he came full circle having been assigned as Pastor of St. Patrick of Heatherdowns. Tony was also extremely involved in prison ministry and served as a spiritual counselor for inmates on death row. Tony will be forever remembered by his mother Rose Riedy, his brothers and sisters Karen (Denny) Schild, Jim Borgia, Mark (Karla) Riedy, Lynn Borgia, Tom (Ann) Borgia, Julie (John) Keegan, Lori (Mark) King, Lynne (Mark) Ludlum and Pam (Tracy) Armstrong. He also leaves behind numerous FAVORITE nieces and nephews and great nieces and nephews who will fight over the title. He also leaves behind several close friends with whom he vacationed. He is preceded in death by his father James V. Borgia, step-father Edwin P. Riedy, brother Gene Borgia, and great niece Calla Rose Bellman. Visitation will be held on Thursday, December 20th at Our Lady, Queen of the Most Holy Rosary Cathedral beginning with Reception of the Body at 3:00 p.m. and continuing until 8:00 p.m. Vespers will be prayed at 7:30 p.m. The Funeral Mass will be held on Friday, December 21st at 11:00 a.m. with the Most Revered Daniel E. Thomas, Bishop of Toledo, as the principal celebrant. There will be visitation Friday morning beginning at 9:00 a.m. until the time of the Mass. Additional visitation will be held at St. Paul’s Catholic Church, Norwalk, Ohio on Friday evening from 6-8 p.m. Mass will be celebrated on Saturday in the church at 10:30 a.m. with interment to follow in St. Paul Cemetery. Tony would not want us to be sad, but he would want us to celebrate his life of serving Christ. He had a huge personality, a huge heart and huge ambitions for all the parishes he served. He was a force that could not be contained and his impact will continue to ignite flames for a long time. The family would like to thank Fr. Paul Schreiner, Lydia Ellinwood, Tina Abel, and ALL the staff and parishioners of St. Patrick of Heatherdowns for their support. In lieu of flowers, family requests memorial donations in memory of Tony be made to St. Patrick of Heatherdowns, 4201 Heatherdowns Blvd., Toledo, OH 43614 or FCEDO, 93 E. Main St. Norwalk, Ohio 44857. Fr. Tim Kummerer remembered Tony in this way "Tony was one of the best priest's ever...When I think of Tony...I think of Nathaniel in the scriptures...Jesus said, "There is no duplicity in him"... in other words; what you see is what you get...and that was Tony...he said it like it was...he was so authentic... He gave all of us the freedom to be who we were... without apology...and since grace, always builds on nature...he gave us permission to let God start with us, just exactly where we were.... Priests like Tony don't come around very often...you were lucky to have him...And he was lucky to have all of you...I hope you know how much he loved to work as a team...and how he saw the strength of the parish in the strong bonds of relationships between people...and he believed that a parish staff models life for the rest of the community." Classmate Monsignor Michael Billian remembered Father Tony this way. “He lived his faith and his priesthood boldly with a fierce commitment to those who most needed a connection to Lord: the poor, the imprisoned, the lonely, especially the elderly the children, youth and young adults. Using the gifts, talents and personality the Lord gave him, he made Christ more present in the world.”

The family of Tony Albert Borgia created this Life Tributes page to make it easy to share your memories.

Send flowers to the Borgia family.