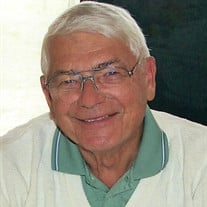 Thomas L. “Sam” Irmen, of Maumee, Ohio, passed away peacefully at age 91 on October 16, 2019, at Promedica Ebeid Hospice Residence in Sylvania. His life is treasured and celebrated by Charlee, his wife of 70 years, his daughters Jaine Place, Jean (deceased at birth), JoDee (Bruce) Robertson, and Betsy (Andy) Damm, and his sons Pat (Bridget), Mike (Shannon), Terry (Tonia) and Tom (Julia). He was “Grampa Sam” to 18 grandchildren and their spouses, as well as 7 great grandchildren. He was a beloved brother to four sisters: Mary Ann Colturi of Sylvania, Jean O’Connell of Toledo, Rita McInnis of Paradise Valley, AZ, and Kathleen O’Neill of Estero, FL. He was a brother-in-law to Eileen Irmen of Kalamazoo, MI, widow of Sam’s only brother Jim, who preceded him in death in 2018. Sam’s dedication to family was legendary. Nothing made him happier or prouder than knowing his family of 48 descendants all loved being together and that everyone felt he or she was his favorite. Nothing made his family happier than feeling his great love, laughing at his teasing and self-deprecating humor, his wise counsel only upon request, and his never-failing pride and support in their struggles as well as their accomplishments. Regardless of the project, celebration or practical joke, his family learned that big event planning under Sam’s leadership would unfailingly take on ridiculously huge and creative proportions, with laughter always at the center. This was his cunning approach to building a family known for service to others. Sam also set the example for quiet spirituality and dedication to his Catholic community, always demonstrating how caring for others not as fortunate and putting in the work to help them meet their life challenges was the most important form of prayer. Sam was born to parents Stephen and Kathryn Irmen in Maumee on January 14, 1928. He attended St. Charles Catholic Elementary School and was a 1945 graduate of Central Catholic High School in Toledo. He graduated with a B.S. in Agriculture from Michigan State University in 1949, where he was especially proud to be the captain of MSU’s first national championship track and cross country teams. In 1945, while at MSU, he met his future wife, Charlene Gates, whom he married on November 26, 1949. Sam began working for the Anderson’s dairy farm while still in high school and stayed with The Andersons for 48 years as they built their first grain terminal in Maumee and eventually developed the company to become one of the premier agribusinesses in the country. He was a highly respected leader who was committed to perfecting grain operations, as well as making an art of community and government relations. Never happy with average results, he was always driven to “exceed expectations,” a phrase he was so proud to incorporate in the mission statement he helped develop for the company. More importantly, Sam was known for his absolute integrity, his laser focus and project team leadership, his respect for every employee, and his friendly sense of humor. He was president of several national trade organizations representing American farmers and agribusiness. He retired from The Andersons in 1995. He was a gifted public speaker and dedicated community leader who devoted countless hours to charitable work, especially Maumee Valley Habitat for Humanity, where he led the construction of almost 40 homes, and served on the Board of Directors over many years, leveraging his many friendships to acquire properties and services and to enhance community outreach. In 2007, he was honored with a nomination for the Jefferson Award for Public Service, a nationwide program for honoring ordinary people who do extraordinary things without expectation of recognition. He was a founding board member of, and decades-long participant in, the William Guy Forbeck Research Foundation in 1985, dedicated to accelerating progress in the fight against cancer through a unique approach to scientific collaborations to hasten cancer research. Visitation 2-8pm Friday, Oct. 18, at Coyle Funeral Home, 1770 S. Reynolds Road, Toledo, OH 43614. Prayer service at 6:30 pm, followed by shared personal reflections. Funeral Mass will be held at 10:30am, Saturday, Oct. 19, at St. Joan of Arc Catholic Church, 5856 Heatherdowns Blvd., Toledo, followed by lunch reception. Private burial service for family at St. Joseph’s Catholic Cemetery in Maumee following luncheon. In lieu of flowers, donations may be made to St. Joan of Arc Catholic Church or to a charity of choice.

Thomas L. &#8220;Sam&#8221; Irmen, of Maumee, Ohio, passed away peacefully at age 91 on October 16, 2019, at Promedica Ebeid Hospice Residence in Sylvania. His life is treasured and celebrated by Charlee, his wife of 70 years, his daughters... View Obituary & Service Information

The family of Thomas "Sam" Leo Irmen created this Life Tributes page to make it easy to share your memories.

Send flowers to the Irmen family.