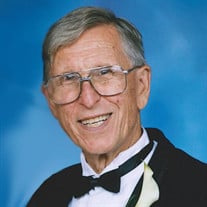 Thomas Edward Weisenburger, age 84, of Maumee, OH passed away Thursday December 31st, 2020 with his family by his side. Tom was born May 27th, 1936 in Toledo, OH, the son of Robert and Mary Francis Weisenburger. Tom graduated from Central Catholic High School in 1954, attended college at the University of Detroit in 1958, and graduated Law School at Santa Clara University and was admitted to the Ohio Bar in 1961. Tom was an attorney by trade and has been practicing law since getting his Juris Doctor in 1964. He continued to practice law right up until his death. In addition to his law practice Tom served on behalf of many charitable and religious organizations including as Past-President of Toledo Council of Catholic Youth, Serra Club of Toledo, and the Old News Boys. He was a fourth degree in The Knights of Columbus and was on the Institutional Advancement Committee of the Board at Central Catholic. He was a tremendously altruistic man who was charitable with both individuals and organizations who needed help. Tom had many interests that included travel, bird watching, skiing, and fishing, but Tom mostly relished the time that he spent with both his children and grandchildren. He attended almost every sporting event involving his 21 grandchildren. He organized an annual family ski trip with his kids and grandkids, and regularly organized large family vacations. He also loved taking his sons and grandsons fishing both locally and to the Rockwell Trout Club. He took frequent trips overseas that almost always involved one or more of his children. Tom was very religious and loved his Catholic faith. He made Ignatian retreats annually to Manresa for 57 years. He was active member of the St. Joseph Maumee and was a daily communicant. He has imparted his devotion and faith onto many of those around him, including his children. If you ever were greeted by Tom you would know he felt he was truly "blessed, anointed and wonderful". He is survived by his wife Sandy, and his children Andrew (Pam) Weisenburger of Maumee, OH, Clare Mitchell (Tim Whetro) of Maumee, OH, Dan (Tami St Aubin) Weisenburger of Toledo, OH, Matt (Sara) Weisenburger of Perrysburg, OH, Pete (Stephanie) Weisenburger of Avon, OH, and Therese (Jake) Wilkinson of Toledo, OH; 21 grandchildren Nate, Charlie and James (Andy), Lauren and Jessica (Clare), Thomas, AJ, and Abby (Dan), Isaac, Lily, Alex, Violet, Ethan, and Rose (Matt), Zach, Luke, and Jake (Pete), and Ollie, Simon, Henry, and Louie (Therese); his brother Dick; and many nieces, nephews and cousins. In addition to his parents Tom was also preceded by his brother Robert Phelps Weisenburger. Visitation will be at the Coyle Funeral Home, 1770 S. Reynolds Rd. on Tuesday, January 5, from 2:00- 8:00 p.m. with a Scripture service at 7. The Funeral Service will begin in the mortuary on Wednesday, January 6 at 10:00 a.m. followed by Mass at St. Joseph Catholic Church in Maumee at 10:30. Burial will be at St. Joseph Cemetery. Masks and social distancing are required. The Mass will be livestreamed on the St. Joseph Church Facebook page. In lieu of flowers, Tom would have preferred contributions be made to St. Joseph Maumee Catholic Church, Annunciation Radio, or Foundation for Life. Please leave a condolence message at CoyleFuneralHome.com.

Thomas Edward Weisenburger, age 84, of Maumee, OH passed away Thursday December 31st, 2020 with his family by his side. Tom was born May 27th, 1936 in Toledo, OH, the son of Robert and Mary Francis Weisenburger. Tom graduated from Central Catholic... View Obituary & Service Information

The family of Thomas Weisenburger created this Life Tributes page to make it easy to share your memories.

Send flowers to the Weisenburger family.