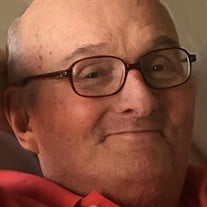 Thomas Merrill Sheets, 74, passed away on Friday, May 20, 2022 with family members by his side. Tom was born February 27, 1948, grew up in the Toledo area and graduated from DeVilbiss High School where he excelled on the Tigers football team as an offensive tackle (all-city). He attended Rutgers University and later The University of Toledo where he earned his Bachelor of Business Administration degree. While at UT, Tom joined the ROTC program. He enlisted in the army and was commissioned as a 2nd Lieutenant. He married Nancy (Wollenweber) Sheets and settled in Grand Rapids, MI where they were blessed with their daughter Amanda. After that marriage ended, Tom married Catherine "Kitty" Winze of Grand Rapids, MI. They divorced in 2019 and Tom returned to the Toledo area to be close to his daughter and grandchildren. At an early age, Tom had a keen interest in butterflies but his life-long passion was everything related to airplanes. He built hundreds of models and loved flying radio-controlled sailplanes. He was also an avid reader and knew vivid details and history of nearly every airplane ever designed. Tom had a very successful sales career at Westinghouse/Wesco for over 40 years and earned the Presidential award for exemplary sales performance. Since retiring, "Papa" particularly enjoyed spending time with his grandchildren and attending all of their school events. He will be dearly missed. Tom is survived by daughter Amanda (Justin) Ballard of Sylvania, OH, grandchildren Gavin, Abigail, and Lyla, sister Laura (Jim) Kroeger of Harrison, TN, brother Charles (Beth) Sheets of Maumee, OH, as well as many nieces, nephews, and cousins. He was preceded in death by his sister, Susan (Lewis) Pyenson, and his parents Martha (Merrill) and Ted Charles Sheets. Visitation will be held at Coyle Funeral Home, 1770 S. Reynolds Rd. in Toledo, OH on Sunday, May 29 from 1-4 p.m. with a brief funeral service at 3 p.m. A private burial will be held the following week at Toledo Memorial Park. Donations can be made to the Wounded Warrior Project in his honor.

Thomas Merrill Sheets, 74, passed away on Friday, May 20, 2022 with family members by his side. Tom was born February 27, 1948, grew up in the Toledo area and graduated from DeVilbiss High School where he excelled on the Tigers football team... View Obituary & Service Information

The family of Thomas Merrill Sheets created this Life Tributes page to make it easy to share your memories.

Send flowers to the Sheets family.