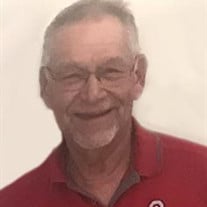 Thomas J. Peternel, Sr., 65, passed away suddenly on April 28, 2019 while on his annual golf trip with his good friends in Las Vegas, Nevada. He was born to Joseph and Helen (Garn) Peternel on November 26, 1953 at St. Charles Hospital, being the first baby ever born there on Thanksgiving. Thomas graduated from Maumee High School in 1971 where he excelled at basketball and gained the nickname Panther Pete and where he will be inducted into the hall of fame later this year. After working for Biniker Builders he met and married the love of his life Barbara (Biniker) Peternel in 1975. Thomas started a long volunteer coaching career a t the YMCA in 1981 where he coached his son in basketball. He also coached basketball and football at St. Patrick of Heatherdowns Church and at Maumee High School as well as the play by play announcer for Maumee for many years for the high school basketball programs. He was a member of the Knights of Columbus, St. Patrick of Heatherdowns Friday night golf league, Northern Lights Masons, and the Wauwauwaska Hunt Club. Thomas was a past president of the Toledo Association of Home Builders and a long time member of Ducks Unlimited. He enjoyed hunting with his dogs Duke, Hondo, Buckeye, Maggie, Coot and others; Golfing with his friends but most of all watching his grandchildren play sports. In the summer of 2011 he had 3 of his grandkids on the same team in Maumee Little League (Mady, Ethan and Mickey) were all able to play together with his son, Son in law and friends as the coaches. This was truly a pleasure for him and typically his oldest grandson Joey was on the adjacent field playing so he could see both at the same time. To date one of his favorite pass times was watching his oldest grandson Joey play and excel in baseball in high school and now in college and very rarely missed any of his 100 plus games per year, he and Grammy would often split their time between kids games if they all played at the same time…which was frequent, but they always made it work and each kid feel special to have them there. His 4 oldest grandkids were relatively close in age and he was able to enjoy many of their activities together but then came the second wave of grandkids….. Noah lead it off followed by Jaxson, Kinley, Sophia and Luke who was 15 years younger than his older brother when born. This brought a whole new life to Papa and his love for his babies and they couldn’t have been happier or had anyone better to just hang out with. He was an avid Ohio State Football, Duke basketball and Green Bay Packers fan recently taking a trips to Lambeau Field with his son Matt and Grandson Mickey and in last year he was able to take his grandson Ethan to a Notre Dame game and Joey to see Duke play at Camden Indoor Arena and these kids will cherish these memories forever. Thomas is survived by his wife Barbara; children Thomas, Jr. (Brittany), Jill M. (Wes) Byrd, Beth A. (Steve) Kujawa, Matthew J. (Victoria); and grandchildren Joey, Mickey, Ethan, Madyson, Noah, Jaxson, Kinley, Sophie, and Luke. Friends may visit at the Coyle Funeral Home, 1770 S. Reynolds Rd., on Sunday, May 5 from 3-8 p.m. A Knights of Columbus Service will begin at 6:00 p.m. and a Scripture Service will follow at 6:30 p.m. Funeral Services will begin on Monday, May 6 at 9:15 a.m., in the mortuary, followed by a Funeral Mass at 10:00 a.m. at St. Patrick of Heatherdowns Church, 4201 Heatherdowns Blvd., Toledo. Interment will be private. Memorials may take the form of a donation to either St. Patrick's of Heatherdowns Athletic Association or to the Maumee High School Athletic Boosters Organization.

Thomas J. Peternel, Sr., 65, passed away suddenly on April 28, 2019 while on his annual golf trip with his good friends in Las Vegas, Nevada. He was born to Joseph and Helen (Garn) Peternel on November 26, 1953 at St. Charles Hospital, being... View Obituary & Service Information

The family of Thomas John Peternel Sr. created this Life Tributes page to make it easy to share your memories.