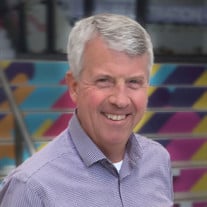 Thomas H. Metzger, of Maumee, who built a Toledo business institution, overcame cancer twice, and never met a baseball stadium that he didn’t love, passed away on Wednesday, February 27, 2019 at The Toledo Hospital surrounded by his loving family. He was 61. As CEO of Metzgers, an expansive print and fulfillment company, Tom proved himself a brilliant entrepreneur and a gifted leader. He cherished his relationships forged with co-workers, peers within the printing industry, and clients. He led by example, with a strong work ethic, inventive mind, and a deep loyalty to those around him. He was proud of the awards that he and Metzgers received, including inductions into the Printing Industry Hall of Fame and Entrepreneurial and Business Excellence Hall of Fame, as well as the Torch Award for Marketplace Ethics from the Better Business Bureau. He drew pride from not only operating a family business, but ensuring its longevity and success. He was grateful to share in each achievement with his father, brothers, sister, and more recently his son, Tony. Tom was born in Toledo on April 18, 1957 to Norb and Patt Metzger. He enjoyed a lively childhood with his siblings Dick, Cathy, Connie, and Joe. They were longtime members of the South branch of the YMCA, where he was an avid swimmer/diver. Tom attended Harvard Elementary School, and as a member of the St. John’s Jesuit High School class of 1975 he competed on the cross-country and wrestling teams. But some of his best times were less structured. With his siblings and their neighborhood friends, a young Tom transformed Mound Ave in South Toledo into a launch pad for adventures. As a young adult, Tom cultivated friends through his many hobbies: playing softball, snowmobiling, boating (either at the controls or trailing on skis), and working on the grounds crew for the Toledo Mud Hens. On one particularly special night in 1979, while shooting pool at Charlie’s Blind Pig, he met his future wife, Anita (Diehl). They married on September 5, 1981 and soon had two sons, Adam and Tony. With his father, Norb, and his brother, Dick, he co-founded Type House in 1976. His brother Joe quickly joined the fold. As co-leaders, Tom and Joe were an exceptional duo, two sides of the same coin. With the addition of his sister Connie, the family business evolved from a small typesetting shop into the current-day iteration of Metzgers, which employs over 100 people in the family's hometown of Toledo. For Tom, family stood above all else. A member of St. Patrick of Heatherdowns parish, Tom enjoyed coaching both of his sons in sports. He reveled in sharing their accomplishments with family and friends; they were, in Tom’s eyes, his greatest achievement. He loved traveling, cooking out, and playing cards with his family and both his and his wife's siblings. He liked to share memories from favorite trips, like those to Alaska, Amsterdam, Colorado, Cooperstown, Disney World, and Germany for the 2016 drupa print trade show. Tom enjoyed being outdoors, running at Swan Creek Metropark, and taking care of his lawn. He loved sports and supported University of Toledo football and basketball, as well as Toledo Walleye hockey. It had been a goal of Tom’s to visit every National Park and MLB stadium, but on a sunny day with his wife and kids, any ballpark did just fine. His favorite activity was taking them on a summer afternoon to watch a Tigers or Mud Hens game. In one hand, a box of popcorn; in the other, a cool beer. Tom first battled cancer in 1989, defeating lymphoma with help of radiation treatment. The same radiation eventually caused its own challenges. In 2006, he had his first heart surgery. Doctors encouraged him to become more active, which he naturally took as a challenge. In 2009, he completed the Chicago Marathon. Then he did it again. And again. And a fourth time, running his last Chicago Marathon in 2014. Tom was a fighter. He would eventually win a second bout with cancer and undergo a second major heart surgery. But the effects of the radiation eventually began to target his respiratory system. Tom valiantly battled to the end. His family would like to thank his team of doctors as well as the staffs of both the Toledo Hospital and the University of Toledo Medical Center for all of their expertise, caring, and hard work. Tom was preceded in death by his father, Norb Metzger, his mother, Patt Metzger, and his brothers, Dick Metzger and Joe Metzger, as well as his father-in-law Harvey Diehl. He is survived by his beloved wife, Anita, his sons Adam and Tony, his sisters Cathy Plante (Ken), Connie Flahie (Jim), his mother-in-law, Leona Diehl, his sisters-in-law Marilyn Metzger, Dana Metzger, Teri, Lisa, Helen, and Dee-Dee Diehl, Mary Ann Lacure (Larry), his brother-in-law, Jim Diehl, and his much loved nieces and nephews. Visitation will be held at Coyle Funeral Home from 12:00pm to 6:00pm on Sunday, March 3, 2019 at 1770 S Reynolds Rd. Funeral services will be at St. Patrick of Heatherdowns on Monday, March 4, 2019 at 10:00am. The family requests that in lieu of flowers, those interested consider a donation to Hospice of Northwest Ohio or The Hickman Cancer Center at Flower Hospital.

Thomas H. Metzger, of Maumee, who built a Toledo business institution, overcame cancer twice, and never met a baseball stadium that he didn&#8217;t love, passed away on Wednesday, February 27, 2019 at The Toledo Hospital surrounded by his loving... View Obituary & Service Information

The family of Thomas Herbert Metzger created this Life Tributes page to make it easy to share your memories.

Send flowers to the Metzger family.