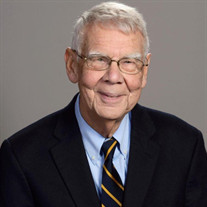 Born in Toledo on May 16th, 1936 to Adeline and Arnold Klein, Thomas A. Klein lived a good and full life as an educator, writer, community supporter, friend, husband, father and grandpa. He passed away on September 17th at Ebeid Hospice from multiple health problems. He attended Gesu, graduated with the infamous Class of ’54 from Central Catholic (a proud recipient of the Order of the Celtic Cross Award in 2003), graduated from the University of Dayton, received his MBA from The University of Detroit and his Ph.D from The Ohio State University in 1964. He signed on to the College of Business faculty at Toledo University which was transitioning from a city school to a state university and renamed The University of Toledo. It grew and he helped in that process. His early interests were statistics and marketing, teaching the required course for MBA students in research methodology. He served as a liason for the implantation of The Model Cities program and plans for the establishment of the Farmers’ Market. In 1968 he was named One of the Ten Outstanding Young Men of the Year by the Junior Chamber of Commerce. He taught marketing courses centered on social costs and also designed courses for non-profit organizations. He mentored many students who kept in touch through the years. At the University, he was named the Director of the Business Research Center, was the Associate Dean for many years and served as Acting Dean for the College of Business during the 80s and early 90s. Always aware of collegiality, he instituted the College family picnic and the get-togethers for new faculty to aid their integration. During this time, he was instrumental in instituting the Center for Family Business and the Sales Program. His focus evolved to business ethics. He was a scholar, writing many articles and presenting papers for professional conferences plus two books, one of which was seminal in business ethics. The push he received form colleagues worldwide was enabling for him. He was most proud of the Macro Marketing Association Award in 2013 for his sustained and scholarly contributions to the field. Sabbaticals were not just time off to enjoy a sunset, but spent researching and teaching which enabled him to widen his horizons working with other faculty. He did stints at the University of Rochester, University of California Berkeley (that was an eye-opening, jaw dropping, family experience), Simon Fraser University in Vancouver British Columbia and at Nyenroda School of Business in the Netherlands. Officially he retired from UT in 1993. He was invited to teach Business Ethics at the University of Notre Dame which had him commuting to South Bend for a weekly three day stay, residing with retired Holy Cross Brothers. He was then invited back to UT for two more years to establish a Business Ethics Center. He believed in supporting organizations which aided people to succeed. Asked to serve on many Boards and numerous committees, he offered his expertise, but was not reticent to sometimes offer a differing view. He worked with Civil Rights groups in Toledo. Sometimes an essay appeared in The Catholic Chronicle, such as Catholic Schools Must Take All, Not Just the Elite (2/6/1976). His focus centered on groups whose goal is betterment of society. He was a long time member of the Boards of Goodwill Industries and of the Catholic Charities (President). He also served in the past on the boards of the University of Dayton, Toledo Rotary, the Metropolitan YMCA Board, the UT Y Board, The Diocesan Catholic Schools Board, and Toledo Opera. Tom was not all work and no play: He and Karen travelled the world, but enjoyed their hometown very much, loving the symphony, opera, jazz concerts as music was for the mind and soul: six bars in and he could name the composer! He loved local live theatre, the art museum, and the fellow patrons. Saturday night was date night with Karen and Sunday afternoons were family excursion times. He had fun going to dinner with good conversation, playing tennis, hosting dinner parties, enduring his wife’s latest cooking forays and, of course, so many activities with his family. Camping in the Sears tents across the country to California for six weeks and the return is stuff of legend. He was the cheerleader and analyzer at soccer games and pushed and begged the CYO to begin their competitive program forty years ago. He was a strong supporter of his children’s academics, sports and science fairs, following the same pattern later as Grandpa. They knew they had his love and support. He was a longtime active member of Toledo Rotary and of The Toledo Club where he participated with appreciation for all the wonderful members. He was quick with a quip, exhibiting his wry sense of humor. Survived by his wife of fifty-eight years, Karen E.; his children, Dr. Peter, nicknamed Fritz, (Julie) and Kirsten (Michael) Dusseau of Denver; grandchildren, Andrew, Katherine and Daniel Klein, Otto and Henry Dusseau and brother, James E. (Sally) of Akron. A son, Stephen, died in infancy. Thanks go to Meg for her wonderful care at Ebeid Hospice. The Funeral Mass will be at 11:00 a.m. at St. Joan of Arc, 5950 Heatherdowns Blvd., Saturday September 26th, with visitation beginning at 10 am. Masks required. The Funeral Mass will also be live streamed via St. Joan of Arc’s YouTube channel. Those wishing to make a memorial contribution might consider The Thomas Klein Endowed Fund For Business Ethics at UT, Catholic Charities or to a charity of donor’s choice. Please view and sign our online “guest registry” at CoyleFuneralHome.com

Born in Toledo on May 16th, 1936 to Adeline and Arnold Klein, Thomas A. Klein lived a good and full life as an educator, writer, community supporter, friend, husband, father and grandpa. He passed away on September 17th at Ebeid Hospice from... View Obituary & Service Information

The family of Dr. Thomas A. Klein (Longtime UT Professor) created this Life Tributes page to make it easy to share your memories.