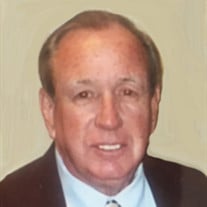 Thomas Joseph Davidson, age 79, of Maumee, Ohio, passed away peacefully on October 17, 2017, surrounded by his loving family after a long and courageous battle with Alzheimer’s disease. He was born on March 19, 1938 in Cleveland, Ohio, to Archibald and Mae (Ryan) Davidson. Tom worked most of his career as a paper salesman for several commercial paper companies, finally retiring in 1999. During his successful career he received numerous awards for his accomplishments. He was married to his sweetheart, Sandra (Cowley) on April 28, 1962 in Euclid, Ohio. Having four children together, they raised their family in Waterville, Ohio before moving to Onsted, Michigan for about 10 years. In 2001, they moved back to Maumee, Ohio to be closer to their children and grandchildren. When Tom was not spending time with family, you could always find him at his favorite place, Heatherdowns Country Club, golfing with his longtime golfing buddies. Tom was also a member of St. Joseph’s Church in Maumee and a 45 year member of AA. He was loved and respected by all who knew him. Tom is survived by his loving wife of 55 years, Sandra; children Mary Brown (Thomas Sperling), Ann Harris, Thomas (Teresa), and Jennifer (Stephen) Ruiz; siblings Sr. Lois Ann, OSU, Donald (Mary Ann), Mary (Verne) Cosens, Helen (Jerry) Uzl and David (Mary); thirteen grandchildren and five great-grandchildren. He is preceded in death by his parents, his brother, James and sister, Dorothy Belavich. Friends may visit at Coyle Funeral Home, 1770 S. Reynolds Rd., Toledo, Ohio, on Thursday, November 2 from 2-8 p.m., with a prayer service at 7 p.m. Funeral services will be held on Friday, November 3, beginning at 11 a.m. at St. Joseph’s Catholic Church, 104 W. Broadway Street, Maumee, Ohio. In lieu of flowers, please consider donating to the Parkcliffe Memory Care Community, 4234 Parkcliffe Ln. Toledo, OH 43615, Alzheimer’s Association or ProMedica Hospice. We would like to thank Parkcliffe Memory Care Community and ProMedica Hospice for their compassionate care and support. Please leave a condolence message for the family at CoyleFuneralHome.com.

Thomas Joseph Davidson, age 79, of Maumee, Ohio, passed away peacefully on October 17, 2017, surrounded by his loving family after a long and courageous battle with Alzheimer&#8217;s disease. He was born on March 19, 1938 in Cleveland, Ohio,... View Obituary & Service Information

The family of Thomas Joseph Davidson created this Life Tributes page to make it easy to share your memories.

Send flowers to the Davidson family.