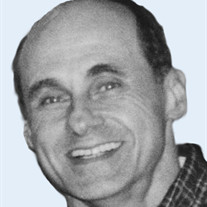 Thomas "Tom" G. Boissy of Maumee, passed away in Hospice of Northwest Ohio on Tuesday, September 28, 2021, at the age of 75. He was born December 26, 1945 in Oceanside, CA to Edward and Leola Boissy. Tom is survived by his wife, Kathleen Robinson; his sons, John (Suzanne) and Tom; sister, Christine (Jim) Greiner of Lexington, VA; uncle, Edgar Rodenhauser; grandsons, Jay, Foxx and Cosmo and great-grandson, John Jr. Tom graduated from Sylvania Northview High School in 1963 where he excelled in Math and Science while lettering in Track and Field and Football as a team co-captain. Tom was chosen as a third alternate to attend the Air Force Academy. He majored in Journalism at Bowling Green State University graduating in 1968. After college, Tom following his father in the local Toledo radio and television industry working as an assistant producer for WSPD Television and working on a number of programs with local television personalities. Kathi and Tom married on April 21, 1967 and raised their family in the "Reynolds Corners" neighborhood of West Toledo near Bancroft and Reynolds. In 1986, they purchased their dream home on a small private lake neighborhood in the "Williamsburg on the River" development near Otsego Park just outside Grand Rapids, OH. Tom's career interests would lead him into the construction industry where he built a career specializing in industrial ventilation design and sales, eventually opening his own company, Ohio Ventilation Control. Tom retired in 1995 due to health reasons and focused his time and energy on home remodeling projects and learning to sail on Lake Erie. He enjoyed going to football games and wrestling matches and was an avid fisherman and later enjoyed ice fishing with friends in Canada. The family would like to thank Comfort Keeper aides for their care and support and Sincera Supportive Care and Hospice of Northwest Ohio. A small private visitation and service to remember Tom will be held for close family and friends. Thank you for your thoughts and prayers. In lieu of flowers, the family requests that donations be made to the ALS Foundation. Please view and sign our online "guest registry" at CoyleFuneralHome.com

Thomas "Tom" G. Boissy of Maumee, passed away in Hospice of Northwest Ohio on Tuesday, September 28, 2021, at the age of 75. He was born December 26, 1945 in Oceanside, CA to Edward and Leola Boissy. Tom is survived by his wife, Kathleen Robinson;... View Obituary & Service Information

The family of Thomas G. Boissy created this Life Tributes page to make it easy to share your memories.

Thomas &quot;Tom&quot; G. Boissy of Maumee, passed away in Hospice of Northwest...

Send flowers to the Boissy family.