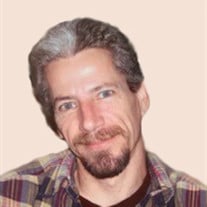 'May your Spirit be Guided by the Hawk, May your Soul Rest with the Lord.' Thomas Edward Benner, 57, of Toledo, Ohio, passed away on Sunday, July 11, 2021, at McLaren St. Luke's Hospital in Maumee, Ohio, after a 9 year battle with his CIDP illness. He was born the youngest of seven children, on March 29, 1964 in Sylvania, Ohio to James and Marilyn Benner. He graduated from Robert S. Rogers High School in 1982. After high school, Thomas attended the Ohio State University with studies in Wildlife Management. When Thomas wasn't spending time with his family he enjoyed everything about life and spent his free time fishing, hunting, and exploring nature. Tom was employed by the Toledo Zoological Society from 1985 till 2012 where he was a Large Mammal Keeper, over the years he worked with several kinds of mammals including snow leopards, primates and bears. Tom ended his career as the primary keeper for the Arctic Exhibit where he developed his love for the Polar Bears, Seals and Wolves. As a Polar Bear Keeper, he was afforded the opportunity to embark on an Arctic adventure to study these magnificent animals in their natural habitat and became an advocate for their preservation. He enjoyed long road trips, the Ohio State University football team and most importantly being a father to his two beautiful daughters. Thomas was preceded in death by his parents, James and Marilyn Benner. Thomas is survived by his two daughters, Paige and Madison, the mother of his two daughters, Angela Benner; brothers, Steven (Debra), Michael (Karen), John (Karen), James, Richard (Janice) Benner and his sister, Laura (James) Kerste, as well as many nieces and nephews who he always spoke so highly and proudly of. Friends may visit at the Coyle Funeral Home, 1770 S. Reynolds Rd., on Saturday, July 24th from 10:00 a.m. until the time of the Memorial Service at 2:00 p.m. Interment will be private. Memorial donations in Thomas's memory may be made to The Toledo Zoological Society, 2700 Broadway, Toledo, Ohio 43609, GBS/CIDP Foundation International, 375 E. Elm St. Suite #101, Conshohocken, PA 19428 or to the charity of the donor's choice. Please view and sign our online "guest registry" at CoyleFuneralHome.com

'May your Spirit be Guided by the Hawk, May your Soul Rest with the Lord.' Thomas Edward Benner, 57, of Toledo, Ohio, passed away on Sunday, July 11, 2021, at McLaren St. Luke's Hospital in Maumee, Ohio, after a 9 year battle with his CIDP... View Obituary & Service Information

The family of Thomas Benner created this Life Tributes page to make it easy to share your memories.

&#39;May your Spirit be Guided by the Hawk, May your Soul Rest with...

Send flowers to the Benner family.