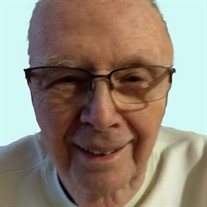 Terry Hanf died on Thursday, January 14, 2021. Terry was born in Toledo, Ohio in 1934. He began as a tool and die maker and rose to Vice President at Toledo Pressed Steel where he worked for nearly thirty years. His passion was boating and fishing.... View Obituary & Service Information

The family of Terry Karl Hanf created this Life Tributes page to make it easy to share your memories.

Send flowers to the Hanf family.