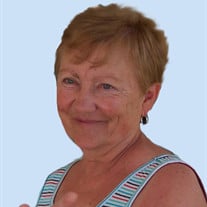 Susan A. Ramge Susan was a dedicated wife to her husband Dennis and dedicated mother to raising and training their two sons, Mark, and Kent. Susan and Dennis initially lived in Defiance then moved to Waterville Ohio. Since the boys were born almost twelve years apart and after they were in school, she had two related career paths. After Mark was enrolled in school while in Colorado, she became a Corporate server hostess for The Johns Manville Corporation in their Manor House facility in the foothills of Denver for three years. After the birth and initial raising of Kent and upon returning to Ohio she started with Perrysburg Schools as a Food Service Worker. As she developed her skills, she worked in all facets of the Perrysburg school lunch program and eventually was designated as Head Cook at the Perrysburg Woodland Elementary School. A position that she held for over 21 years until her tenure was cut short by a hemorrhagic stroke in 2005. She was initially declared a lost cause and committed to palliative care; but, after an anointing with oil, and the singing of "Twinkle, Twinkle Little Star" with her two-year-old Granddaughter Ashley; Susan rallied and ultimately one month later, walked out of the hospital. Susan was a skilled seamstress sewing many of her own clothes and crafts. While in Colorado she developed her skill for producing macramé plant and wall hangings for her own home and the homes of her family and friends. She loved to knit and as she developed the skill produced sweaters, hats and sundry items for herself and others. After she moved to Otterbein Senior Health Care in Pemberville in 2014, she continued her knitting contribution by knitting hats for donation using a knitting loom with a group of ladies known as the "Happy Hookers". She liked to cook for her family and was known far and wide for her special baked bean dish. It was always a special treat for the students in her school when she prepared the dish, some even admitting they "didn't like beans"; let alone the red and green sweet peppers and onions used in moderation to give the dish it's unique flavor along with plenty of brown sugar. After her stroke, and a year of recovery she was able to maintain a high quality of life with minor right-side weakness. Eventually due to the stroke she developed Thalamic Pain Syndrome (TPS) a debilitating nerve tingle in the affected limbs on the right side. Though years of considerable effort was expended by Dennis and Susan to keep the malady at bay, it was to little avail. Large amounts of a nerve medicine became the normal therapy although many alternative means were tried at The U of Michigan, Cleveland Clinic and most recently The Toledo Pain Clinic. It is felt that TPS and its affects are the principal cause of Susan's death. She is survived by her husband Dennis Ramge, her sons, Mark (Susan) Ramge; Kent (Emily) Ramge; her brother, Steve (Gisela) Mohr; grandchildren, Katherine, Stephen, Ashley and Ellie Ramge; and her nieces, Nicole (Dave) Beyersdorf and Natalie (Derek) Cook. A special thanks goes out to every Care Giver that treated Susan, --THANK YOU--; your dedication to task and love that you have expressed to her by your actions and deeds through the years will not be forgotten or diminished in any way. There will be a private, by invitation only visitation at Coyle Funeral Home, 1770 S. Reynolds Rd. followed by burial in Oakwood, Ohio at Prairie Chapel Cemetery. In lieu of flowers, the family asks that donations be made to the organization of your choice in her name. Please view Susan's memorial video tribute and leave a condolence message for the family at CoyleFuneralHome.com.

Susan A. Ramge Susan was a dedicated wife to her husband Dennis and dedicated mother to raising and training their two sons, Mark, and Kent. Susan and Dennis initially lived in Defiance then moved to Waterville Ohio. Since the boys were born... View Obituary & Service Information

The family of Susan Ann Ramge created this Life Tributes page to make it easy to share your memories.

Susan was a dedicated wife to her husband Dennis...

Send flowers to the Ramge family.