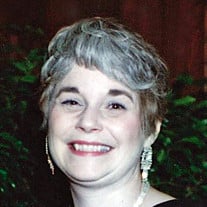 Sandra Oberdier Reid, 70, died peacefully at home on Sunday, November 14, 2021, due to MSA. She is at peace with her Maker and Sovereign Lord. Sandra and her husband Tom Reid owned the Reid Casket Co. of Toledo Ohio. Sandy wore so many "hats" throughout her life supporting those she loved most - and if you knew Sandy, you knew she wore any hat and wore it so well. Sandy was a loyal employee, a brilliant Pharmacist, a fierce friend, a creative theatre genius, a supportive mother, and a dedicated wife to her husband of 47 years. Sandy was born, raised, and grew up in Point Place, and was also a lifelong resident. As a child, she always excelled in school both in the sciences and also in art. She became an accomplished organist and accompanied many Catholic services around Toledo with her best friend and soloist, Kathy (House) Cook. Education was always important to Sandy's mother, Louise. She encouraged her only daughter to excel in school and go all the way to college before settling down to start a family. Sandy graduated with high honors from Central Catholic High School in 1969 and from The University of Toledo with a degree in Pharmacy in 1974. Sandy was both brilliant and beautiful. A former Miss Point Place, Sandy was also a recurring model for Lamson Department Store's Teen Board. At one show in 1969, her "date" for the evening was a young man in the audience who would become her partner and best friend for the next 52 years. Sandy met Tom Reid while working at Shoreland Pharmacy. It was truly "love at first sight," at least for Tom, in which he pledged to his friends, "that is the woman I'm going to marry." Sandy and Tom wed in 1974. Sandy was a registered Pharmacist for over 40 years for The Pharmacy Counter. Together, she and Tom worked to build the family business, Reid Casket Company. They had two children, Justin and Anne, and they spent many years devoted to supporting their children in school and in their extracurricular passions of scouting and theatre. Sandy found that her talents in art would be useful and her creative-need satisfied serving as the costumier for the community theatre performances in which her children participated. After her role as pharmacist by day, Sandra would put on her costume designer hat and dream up elaborate designs for a cast of 50+ teens, all while working on a small high school budget. It was a volunteer role that she joyfully continued for 11 years, even after her children graduated high school. Sandy was the director of the family. She ensured that whatever the family did, they did it together. And in doing so, Sandy made friends in each circle and those friendships were so strong that they lasted and grew right up until her last breath. Sandy will be reunited in heaven with her beloved mother, Louise Breksa Oberdier and her father, Hilton "Red" Hastings Oberdier. She is survived by her devoted husband, Thomas Reid, who remained by her side and lovingly cared for her in their home. She is also survived by her brother, Tony Oberdier (Colleen Oberdier), her children Anne (Reid) Gerber (Timothy Gerber) and Justin Reid (Leigh Reid), as well as her "girls"- her granddaughters: Japonica Reid, Athena Reid, Emmeline Gerber, and Luna Reid. She is preceded in death by her second mother, Sandra (Gibson Oberdier) Fish. Visitation hours will be at the Coyle Funeral Home, 1770 S. Reynolds Rd. Toledo, Ohio, Friday November 19 from 3pm to 8pm; Rosary at 7pm. The Funeral Service will be on Saturday November 20 at St. John the Baptist Church on Summit St in Point Place. A viewing at 9am will be followed by a service at 10am. Commital at Calvary Cemetary, Toledo, Ohio. Contributions can be made to Saint John the Baptist Catholic Church, Hospice of Northwest Ohio, or Central Catholic High School.

Sandra Oberdier Reid, 70, died peacefully at home on Sunday, November 14, 2021, due to MSA. She is at peace with her Maker and Sovereign Lord. Sandra and her husband Tom Reid owned the Reid Casket Co. of Toledo Ohio. Sandy wore so many "hats"... View Obituary & Service Information

The family of Sandra Oberdier Reid created this Life Tributes page to make it easy to share your memories.

Send flowers to the Reid family.