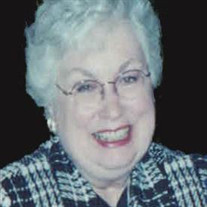 Sally Malhoit, born in 1930 to Ava Marie and Forrest Bassett in Beloit Wisconsin, excelled academically and graduated with honors from every school she attended including Northwestern where she met the love of her life, Jack Malhoit. She hosted her own radio show at WBEL in Beloit, she enjoyed membership in several civic groups, and is remembered by many as an educator at St Angela Hall, McAuley High School, at May Manse College, and the University of Toledo. Sally was the first lay person in the history of the Catholic Church to hold the position of Vice Chancellor. Theater was her greatest passion. She began her stage career with her mother, Ava Marie, a consummate actor in her own right. Sally appeared in many productions of Cathedral Players, Village Players and The Rep. She sang with Jack in the award winning Gesu Ensemble, and the Great Eight will never forget McGillicutty. While the final curtain has fallen for Jack and Sally's brother, Terry; sisters, Suzanne and Babs, are still appearing nightly. The members of Sally's Garden, and in whom Sally may still be found, are: Camila (Mark) DiPietro, Hilary (John) Lindsay, Jocelyn (Lynil) Brown, Kenwyn (Joe) Olin, Darrah (Mick) Nowak, Jon (Barb) Malhoit, Alison (Bob) Pinkelman, Chris, Deirdre, Lauren, Keely, Rob, Ian, Joel, Ashley, Austin, Madeline, Sarah, John, Kyle, Shannon, Kelsey, Domenic, Isabella, Liam, Mac, Lo, Kensley, Kellen, Sully, Vivian, Zaida, Syd, Abby, Logan, Kylie, Olivia, Demi, Ellie, Maggie, Scout, Frank, Charlie, Mark Bassett, Huber family, Pratz and Davis families, Tom Ember, and Father Charles. Visitation will be at Coyle Funeral Home, 1770 S. Reynolds Rd. on Monday April 22, from 2 - 8pm, where a Scripture Service will be held at 7pm. Funeral services will be held on Tuesday April 23 at 10:30 am . in Our Lady Queen of the Most Holy Rosary Cathedral where the family will receive visitors beginning at 9:30 am. Entombment will follow in Ottawa Hills Memorial Park. Memorials may take the form of contributions to Hospice of Northwest Ohio or to the Toledo Opera Association. Please view and sign the guest registry at coylefuneralhome.com.

Sally Malhoit, born in 1930 to Ava Marie and Forrest Bassett in Beloit Wisconsin, excelled academically and graduated with honors from every school she attended including Northwestern where she met the love of her life, Jack Malhoit. She hosted... View Obituary & Service Information

The family of Sally A. Malhoit created this Life Tributes page to make it easy to share your memories.

Sally Malhoit, born in 1930 to Ava Marie and Forrest Bassett...

Send flowers to the Malhoit family.