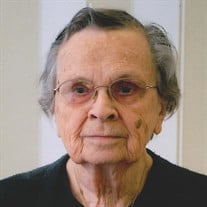 Sister Gertrude Marie Conroy, OSU Sister Gertrude Marie Conroy, 94, died at Ursuline Center on Tuesday, January 29, 2019. She was the daughter of the late Thomas and Gertrude Conroy of Wakeman, Ohio. She entered the Ursuline Convent in 1945 and made her final profession of vows in 1950. Sister Gertrude Marie received a bachelor’s degree in Education and another in Music at Mary Manse College. She did further graduate studies in Music at the University of Michigan. Her teaching career began in Toledo at St. Thomas Aquinas school and she also taught at St. Francis de Sales elementary school, Good Shepherd, St. Charles, St. Agnes, St. Teresa, and St. Angela Hall. She also taught at St. Gerard, Lima and St. Joseph, Tiffin. Sister Gertrude Marie served as principal at Nazareth Hall, Grand Rapids, Ohio. From 1974 until 1990, she taught music at St. Ursula Academy. She left the teaching profession and became the Director of Food Service at St. Ursula Academy Convent for nine years. Sister Gertrude Marie volunteered her services at St. Joseph, Sylvania and at Rosary Cathedral, always keeping her interest in liturgical music. She was a singing member of numerous choirs and choruses during the years, including the Ben Locke Chorale, Toledo Symphony Chorale, David Carter Chorus, Messiah Chorus (under the direction of Sam Szor), Lourdes College Chorus, University of Toledo Summer Sings, University of Toledo Community Chorus, St. Joseph Sylvania Parish Choir, the Diocesan Choir, the Rosary Cathedral Choir, and was a cantor many times for the Ursuline Sisters’ Liturgical Events. Sister Gertrude Marie was preceded in death by her parents and all her siblings: Frances Klear, Helen Nolan, Mary Alice Conroy, and brothers Thomas and Lawrence. She is survived by many nieces and nephews and her Sisters and Associates in the Ursuline Community. Visitation will be held on Friday, February 8 beginning at 3 p.m. with a Vigil Service at 6:30 at the Ursuline Center, 4035 Indian Road, Toledo. The Mass of Christian Burial will be held on Saturday, February 9 at 10:30 a.m. at the Ursuline Center, with burial at Resurrection Cemetery. The Arrangements are by Coyle Funeral Home.

The family of Ruth Isabel Conroy created this Life Tributes page to make it easy to share your memories.

Send flowers to the Conroy family.