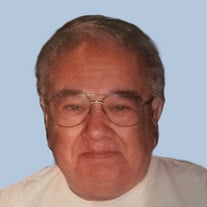 Rudy Apodaca age 86, of South Toledo, passed away peacefully on July 28, 2020 at the St. Vincent Mercy Medical Center. Rudy was born on August 6, 1933 to Ellie and Blas Apodaca in Houston, Texas. Rudy was proud of his Texas roots as he often told stories, and bragged about being from Texas to his children and grandchildren. When Rudy’s family moved to Ohio he attended Gibsonburg High School, where he held multiple records playing sports during his time there. Rudy was a natural athlete playing football and basketball, but mostly excelled in baseball. After graduating high school Rudy joined the United States Army, and served in the Korean War. Following his time in the Army, Rudy then pursued his passion of playing baseball which led him to play in the Federation league. Rudy went on to marry the love of his life, Trina, and started a family with her. He worked very hard to provide for them. His family meant everything to him. Rudy bought 4 of 6 of the houses on the block of Sumner St. where he lived, just so his family could be close. He worked hard to provide for them. Rudy was as a Longshoreman at Toledo Overseas Terminal before working and retiring from UAW Chrysler. Rudy spent his days enjoying golf with friends and family, and he even gave a lesson or two. He enjoyed frequent visits with his grandchildren and great-grandchildren who he called his "Uts”. He will be remembered mostly by the children for humming a special song to the little ones, calling them by the wrong name (on purpose), or telling the older children his life stories. He would always ask the kids "Are you from San Antone?" just to make them laugh. Rudy will be remembered most for making jokes, laughing, and whistling along as he would sit outside listening to his Tejano music. Rudy was preceded in death by his parents, his wife Trina, and brother in law Lupe Hernandez. He is survived by his loving children, Louis (Karen) Apodaca, Laura Good, Sheila Apodaca, Philip Apodaca; grandchildren, Nicole (Mario Campos) Apodaca, Matthew (Angela Henning) Handy, Alicia (Jimmy) Hart, Lon (Angie Ross) Good Jr., Philip Apodaca, Valerie (Sarah Ferguson) Apodaca, Samantha Apodaca, and Porter Apodaca; great grandchildren, Kaili, Simon Peter, Solomon, Cruz, Arianna, Rudy, Sienna, Madelyn, Eric, Mila, Everlyn; and great-great-grandchild Dominic. He is also survived by his brothers and sisters Teresa Apodaca, Angela Hernandez, William (Florida) Apodaca, Loretta Trevino. In-laws Louis (Martha) Quiroga, Robert Martinez, John (Fran) Martinez, Simon Martinez, Anna Marie Portillo, Diane Janczewski, Ernest (Virginia) Esparza, Benigno (Olga) Esparza, Patricia Martinez, Mary Apodaca, and Celia Apodaca, and special family friends Kim Friar, David Friar, Along with many nieces and nephews There will be no visitation. A memorial service will be held on Thursday, August 6, 2020 at Immaculate Conception Church at 1:00 p.m. Interment will be private. The Coyle Funeral Home is assisting the family with the arrangements.

Rudy Apodaca age 86, of South Toledo, passed away peacefully on July 28, 2020 at the St. Vincent Mercy Medical Center. Rudy was born on August 6, 1933 to Ellie and Blas Apodaca in Houston, Texas. Rudy was proud of his Texas roots as he often... View Obituary & Service Information

The family of Rudy Blas Apodaca created this Life Tributes page to make it easy to share your memories.

Send flowers to the Apodaca family.