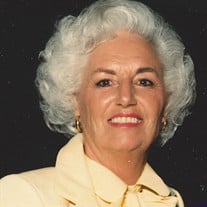 Rosemary Lones died peacefully on April 4, 2020. She was born March 23, 1921 on a farm in Carey, Ohio, one of eight children, to Vincent and Alma Orians. Rosemary married Oliver Lones during WW II in Mineral Well, Texas. After the war they came back to Toledo, where they built their own home. She attended Sayer University of Cosmetology. Rosemary was a professional model for the Lion store, and for many years, a tax consultant for AARP, assisting seniors at tax time. She was active with her husband Oliver in the development of residential properties and in selling homes that were constructed by them. They developed and built Laurel Hills swim and tennis club, and the Frisch's Big Boy restaurants. Rosemary was also a beautician many years with Burton's Hairstylist. She was most proud of her award winning floral designs, some of which included farm tools. Rosemary was a nationally accredited master flower show judge, and a longtime member of several Garden clubs, most recently the River Road garden club. She was an annual Judge and member of the "Glad" society at Lakeside, Ohio. She has lived on Daleford Drive 65 years. Rosemary is survived by her son Russell Lones (Carol Gerken), her five grandchildren, Mike and Mark Lones, Carra Brown, Uel Pitts III, and Colleen Pitts; six great grandchildren; brother Donald (Barb) Orians, sister Ardyth Franklin, and son in law Uel (Paty) Pitts, II . She was preceded in death by her parents, her husband Oliver, her daughter Sue Ann Pitts, and her daughter in law Patty Ann Lones. There will be a private service on Thursday, April 9 at 10:00 a.m. at Coyle Funeral Home, with burial at Calvary Cemetery. Memorial donations may be given to Our Lady of Perpetual Help Church or Putnam County Hospice. The family would like to express their gratitude to the staff at VanCrest Nursing Home in Holgate, Ohio, for the kind and compassionate care of Rosemary. Please leave a condolence message for the family at CoyleFuneralHome.com.

Rosemary Lones died peacefully on April 4, 2020. She was born March 23, 1921 on a farm in Carey, Ohio, one of eight children, to Vincent and Alma Orians. Rosemary married Oliver Lones during WW II in Mineral Well, Texas. After the war they came... View Obituary & Service Information

The family of Rosemary Regina Lones created this Life Tributes page to make it easy to share your memories.

Send flowers to the Lones family.