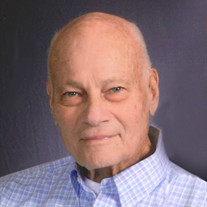 Master Sergeant Ronald E. Boston of South Toledo passed away peacefully at his home on Monday August 16, 2021, surrounded by his family. He was born May 30, 1936, in Toledo, Ohio, the third of five children born to Blandford and Florence Boston. Ron attended St. Catherine's school until 1950, then Central Catholic High School, graduating with the class of 1954. An excellent athlete, Ron played football on the 1951 CYO championship team, and if you come to the visitation, you can see his championship jersey. Ron was adventurous from a young age. He crisscrossed the country summers during high school, and managed, through a combination of hitchhiking and riding the rails, to visit all four corners of the continental United States during the summer between his Junior and Senior year. A daredevil, Ron made the suicide dive into Centennial Quarry, and enjoyed white water rafting, skydiving, and parasailing, and didn't slow down as he aged. At 83, Ron jumped without hesitation into the world's second largest Blue Hole in the Bahamas. Ron continued to travel, finding a companion in his brother John. Together they toured the United States, visiting family and friends from Ohio to California and beyond, taking turns driving, and sleeping most nights in the Scamp, a camper they towed behind John's Toyota. The two, well into their 80s, attempted to kayak the entire Maumee River, and while that effort was thwarted at Antwerp, Ohio, no one doubts they will finish it in the afterlife. We could tell you more stories about Ron's adventures but won't tell since its not clear if the statute of limitations has expired. Ron loved and served his country. After high school, Ron followed in his brother John's footsteps, joining the U.S. Marine Corps. After basic training at Paris Island, he went to Red Hook for parachute training, and spent the remainder of his time as a Marine at various California bases. After his enlistment in the Marine Reserves, he joined the Ohio Air National Guard. He served for 34 years in the Air National Guard in Toledo. His service included a combat deployment to Panama as part of Operation Just Cause. Ron retired from the Guard in 1991 as Master Sergeant (E7). While he had several post-Guard careers, including stints as a Toledo public school bus driver and a Sears hardware expert, he spent much of his time in service. Along with others, he co-founded a non-profit to support service member families: Northwest Ohio Military Friends. Ron provided many family members with keepsakes of their deployed loved ones. Ron had many interests and could and did many things well. There was not a plant he couldn't grow, and he was generous in sharing his garden's tomatoes, peppers, and cucumbers. Ron loved nature and feared no creature. Over the course of his life, Ron's animal companions included a rattlesnake, tarantula, scorpion, alligator, iguana, boa constrictor, as well as the more common household pets like cats and dogs. Ron loved cars and restored his father's 1965 Ford Mustang. Ron and his son Doug showed the car, winning prizes including Judge's Choice and an award of excellence for the restoration. A lover of Harbor Freight, Ron collected the Harbor Freight freebies and shared those as generously as he did his garden bounty. For all his fearless toughness, Ron still managed to be a sweet, kindhearted man. He loved his friends and family and made spending time with them a priority. He saw his Central Catholic friends every first Friday at Shawn's Irish Tavern. He saw Dan more often and traveled to California to visit Denny whenever he could. Ron kept close to his Guard buddies, the Afterburners. In the last several years, he kept company with Sharon, Sherry, and Sue. Neighbor Greta, always kind, was especially generous in Ron's final months, as were Linda, Deanna, Chuck, Mary, Patrice, Alyssa, and Tracy H. Ron was very active in and supportive of the activities of his children, through the schools they attended, the sports they participated in, and the many Scouting trips and campouts, rain or shine, near or far away. He loved leading tours of the airbase for schools and other civic groups. Dad led by an often-quiet example of respect and compassion for others starting with his wife and children and extending to all he met and worked with or served. He never sought to draw attention to himself. He was also known for a great sense of humor and enjoyed playing friendly pranks on others while graciously accepting the same from others. Irene Burns was the love of Ron's life. He married her June 13, 1959, and they were together until her death in2012. They had five sons, including Ron Junior, who preceded them in death. He is also preceded in death by his brothers James and John. Ron is survived by his sons James (Karen), Craig (Georgeana), Doug, and Mark (Barb), grandchildren: Michael, Mary, Matthew, Blake, Michaela, Brent, Rosie, Robert, Andy, Dominic and Mallory, and sisters Karen (Bernie) and Tana (Ron), along with extended family, and many kind and wonderful friends. The family wishes to thank Our Lady of Perpetual Help for the prayers and support, especially the ministrations of Father Manoj Mammen and Deacon Dan Quinn. And thanks too to the neighbors who showered Ron with love in the form of food, especially sweets which he loved. Memorials of tribute can be made to Our Lady of Perpetual Help Catholic Church, Toledo Central Catholic High School or Northwest Ohio Military Friends. Friends may visit at the Coyle Funeral Home, 1770 S. Reynolds Rd. on Friday, August 20 from 2-8 p.m., with a Scripture Service at 7:00 p.m. The funeral will begin at Coyle on Saturday, August 21, at 9:30 a.m. followed by Mass at Our Lady of Perpetual Help Church at 10:00 a.m. Burial with military honors will be at Resurrection Cemetery. Please leave a condolence message and view Ron's video tribute at coylefuneralhome.com

Master Sergeant Ronald E. Boston of South Toledo passed away peacefully at his home on Monday August 16, 2021, surrounded by his family. He was born May 30, 1936, in Toledo, Ohio, the third of five children born to Blandford and Florence Boston.... View Obituary & Service Information

The family of Ronald Boston created this Life Tributes page to make it easy to share your memories.

Send flowers to the Boston family.