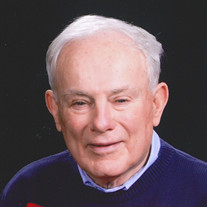 To view a recording of the Live Stream of Ron’s Funeral Service please CLICK HERE Ron L. Schmidt, 88, died peacefully on August 14, 2020 at Hospice of NW Ohio. He was born October 24, 1931 in Toledo, Ohio. Ron graduated from DeVilbiss High School and the University of Toledo, where he was enrolled in the R.O.T.C. program. Ron proudly served his country in the US Army during the Korean War, where he was Artillery 1st Lieutenant. Ron worked as an Accounting Manager for Owens Corning from 1957-1986, and then for NAMSA from 1986-2011. He was a member of St. Paul’s Lutheran Church in Maumee. Ron was an avid fan of the University of Toledo Rocket football and basketball teams. He loved being by the lake, and over the years he owned several summer homes on Devils Lake, MI and Lake James, IN. He enjoyed swimming and skiing. He is survived by his wife Donna, children Steve (Julie) Schmidt, Carol (Dave) Galvan, Michelle (Tony) Flaminio, Christine Schmidt, Lisa (Ken) McIntyre, and Jeff (Holly) Orlowski; grandchildren Marie, Sean, Ryan, Scott, David, Anthony, Michael, Nicholas, Hannah, Kennen and Annie, and 6 great grandchildren. Ron was preceded in death by his mother Evelyn (Burnett) Conrad, step father Earl Conrad, and sister Joyce Case. Friends may visit at the Coyle Funeral Home, 1770 S. Reynolds Rd. on Wednesday, August 19 from 3:00 -7:00 p.m. The funeral ceremony will be held on Thursday, August 20 at 11:00 a.m. at Coyle, followed by a graveside service with military honors at Toledo Memorial Park. Due to current conditions caused by the ongoing pandemic, we are offering a Live Stream of the service beginning at 10:45am on Thursday, August 20 for those who wish to attend the Service virtually. Memorial donations may be given to St. Paul’s Lutheran Church, Maumee, Ohio. Please view Ron’s video tribute and leave a condolence message for the family at CoyleFuneralHome.com.

The family of Ron L. Schmidt created this Life Tributes page to make it easy to share your memories.

To view a recording of the Live Stream of Ron’s Funeral Service...

Send flowers to the Schmidt family.