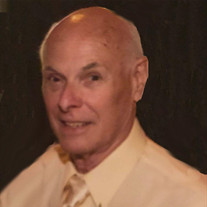 Roger Earl Flynn, 85, passed away peacefully on April 2, 2019 surrounded by his loving family. He was born August 19, 1933 in Bluffton, Ohio to Arthur and Ester (Andrews) Flynn. Roger was a 1951 graduate of Swanton High School, and until recently he met monthly in Swanton with his fellow graduates for lunch. Roger retired from Libbey Owens Ford, but never truly retired. He worked in a hardware store, he delivered ink cartridges, but his favorite job, which he took very seriously was “jack of all trades” for his daughter Tracy. He was a man of faith and truly loved his church. He was a longtime member of Park UCC, where he served on almost every board, ushered on Sundays, played in the hand bell choir with his daughter Amy, and a member of the Aly Oops. He was active in the Arab Patrol with the Zenobia Shrine, and earned his 32nd degree as a Mason. Roger was a true Flynn; there was always a dog at his side. He had a love of all animals. He was a friend to all, with a wonderful sense of humor. He enjoyed spending time with his grandchildren, who adoringly called him “Paka”. He is survived by his wife, Donna; children Amy (Rick) Flack, Tracy (Nabil) Ebraheim, Douglas (Christine) Flynn; grandchildren Cori, Scott, Andrea, Molly, Craig, Daniel, and Miranda. He is also survived by his great grandchildren, Ava, Ashton, Elsie and Lincoln. Roger was preceded in death by his parents, brothers Forrest and Kent, and sisters, Ruth and Ellen. Friends may visit at the Coyle Funeral Home, 1770 S. Reynolds Rd. on Friday, April 5 from 4-8 p.m. The funeral service will be held at Coyle on Saturday, April 6 at 10 a.m. Burial will be at East Swanton Cemetery. The family would like to give a special thank you to his special caregiver, Anna Turner and Hospice of NW Ohio for all of their love and compassion in these past several days. Donations may be given to Hospice of NW Ohio or Park UCC. Please leave a condolence message for the family, and view Roger’s Memorial Video Tribute at CoyleFuneralHome.com.

Roger Earl Flynn, 85, passed away peacefully on April 2, 2019 surrounded by his loving family. He was born August 19, 1933 in Bluffton, Ohio to Arthur and Ester (Andrews) Flynn. Roger was a 1951 graduate of Swanton High School, and until recently... View Obituary & Service Information

The family of Roger E Flynn created this Life Tributes page to make it easy to share your memories.

Send flowers to the Flynn family.