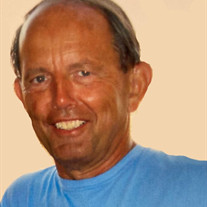 Roger J. Blank Jr., D.D.S, died peacefully on March 27, 2022. He was born in Toledo, Ohio on Jan 5, 1944, to Roger and Rita (Couturier) Blank, Sr. Roger served as an altar boy all through his Catholic school years and was a proud graduate of St. Francis de Sales High School. He graduated from University of Toledo and dental school at The Ohio State University. Upon graduation he proudly served his country as a dentist in the U.S. Army stationed in Ft. Sill, OK and Stuttgart, Germany. Roger was most proud of his 54 year marriage to the love of his life, Georgia (Brown) Blank, their 3 daughters Amy Watts (Frank), Wendy Poitinger (Mike) and Becky Winters (Chris); 10 grandchildren, Jack and Hannah Watts, Abby, Emily, Laney and Molly Poitinger, and Tyler, Lilly, Cooper and Oliver Winters. Roger is also survived by his siblings Sharon Dusseau, Sandy Bolger (Gene), Carol Puszczewiecz, Mark Blank and Denise Gillespie (Tim), and numerous nieces and nephews. He was preceded in death by his parents Roger and Rita Blank, his sister Jennifer Miller and brothers-in-law, Paul Dusseau, Ed Pusczewiecz, Wayne Miller and nephew Terry Bolger. Roger was a beloved dentist in Waterville, OH for many years until retiring in 1996. He cherished his lifelong friendship with his St. Francis buddies, a good golf game and traveling with his family and dear friends. A Memorial Mass will be celebrated on Tuesday, May 3 at 10:00 a.m. with an hour of visitation beginning at 9:00 a.m. at Our Lady of Lourdes Catholic Church. Coyle Funeral Home is assisting the family with arrangements. In lieu of flowers, the family asks that you perform a random act of kindness in honor of a man who was one of the kindest, gentlest souls to grace this earth. Any monetary donations can be made in his memory to The Alzheimer's Association. Please leave a condolence message and view Roger's memorial video tribute at CoyleFuneralHome.com.

Roger J. Blank Jr., D.D.S, died peacefully on March 27, 2022. He was born in Toledo, Ohio on Jan 5, 1944, to Roger and Rita (Couturier) Blank, Sr. Roger served as an altar boy all through his Catholic school years and was a proud graduate of... View Obituary & Service Information

The family of Roger Joseph Blank created this Life Tributes page to make it easy to share your memories.

Send flowers to the Blank family.