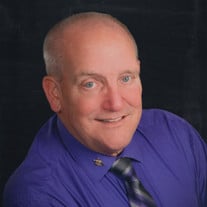 Robert Charles Winterhalter, Jr. age 79 of Toledo returned to his heavenly home on April 13, 2022. Born February 19, 1943 in Toledo, Ohio. Robert was the only child of Robert Charles Winterhalter, Sr and Marjorie Louise Trempf. He had a fondness for football at an early age and graduated in 1943 from Rogers High School being named co-captain of the football team his senior year. However, it was a chance request by a neighbor asking Robert if he wanted to assist with coaching football at St. Patrick's of Heatherdowns that turned into a coaching career that spanned over 40 years. While he was able to easily teach the young players under his charge the technical skills of football; he focused on instilling confidence and teaching life lessons. His football teams often attended masses together which was more exciting to Robert than the actual football game that weekend. He enjoyed traveling and often traveled with family to one of his favorite locations: the Outer Banks of North Carolina. Bob was employed as a manufacturing supervisor at multiple locations including Chrysler and Acklin Stamping. Once he converted to Catholicism in 2001, Bob went "all in" to support and/or lead many St. Patrick's of Heatherdowns parish community groups including parish council, lector, greeter, St. Vincent de Paul Society and completion of lay ministry work to senior living locations to name a few. He possessed a great compassion for other's well-being and loved sharing his faith. Robert is preceded in death by his parents, first wife of almost 35 years Connie (Cook), daughter Roxanne Filby and step granddaughter Lauren Clark. Robert's surviving family includes second wife of almost 19 years Janet (Barnes), both of his sons, Bob (Sandy), and Warren (Angie); son-in-law, Craif Filby; grandchildren, Kristin, Jessica, Eric, Brandon and step grandchild, Michael and great grandchildren Allison and Cameron. Friends may visit at the Coyle Funeral Home, 1770 S Reynolds Rd on Tuesday April 19, 2022 from 2-8 pm will a scripture service will be held at 7 pm. Funeral services will be held at St Patrick's of Heatherdowns Catholic Church on Wednesday April 20th at 11:00 am where the family will great guest starting at 10:00 am. Interment will be private. Contributions can be made to St. Patrick's of Heatherdowns St. Vincent de Paul Society.

The family of Robert Charles Winterhalter Jr. created this Life Tributes page to make it easy to share your memories.

Send flowers to the Winterhalter family.