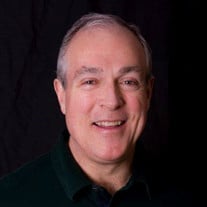 Robert (Bob) Howard Welly (age 70) of Toledo, OH passed away on his birthday, January 11. Bob was a member of the inaugural class of St. John's Jesuit High School (1969), and a graduate of the University of Notre Dame (B.A., 1973) and The University of Toledo School of Law (J.D., 1977). Since 2014, Bob served as Vice President, Real Estate with the Historic South Initiative. Bob was a huge supporter of the arts in Toledo and the surrounding communities. He served as an officer and on the boards of the Toledo Repertoire Theater, the Black Swamp Players, and the Ohio Community Theater Association (OCTA). A life-long actor, Bob's recent roles included Return Ward in Haunted Toledo's 2020 PBS/Amazon Prime documentary "Legends of the Heartland: The Life and Crimes of Return Ward, vol 1"; Santa in The Crosswell Opera House's "Elf" (2019); Dr. Chasable in The Village Players' "The importance of Being Earnest" (2019); Norman Thayer in The Black Swamp Players' "On Golden Pond" (2018); Tony Wendice in Tree City Playhouse's "Dial M for Murder" (2018); Henry Ford in The Village Players' "Camping with Henry and Tom" (2018); and Erronius in The Toledo Rep's "A Funny Thing Happened on the way to the Forum" (2017). In 2018, Bob was awarded an OCTA Regional Festival "Excellence in Acting" award for his role in "On Golden Pond." When he wasn't performing on stage, Bob could usually be found in attendance. Outside the theater, Bob had embraced community development in South Toledo. In addition to his role with HSI, he served as President of the Board of Trustees for Mosaic Ministries and was particularly proud of Mosaic's Baby University, Pre-school, and food service programs. Always a proud Irishman, Bob was a member of Notre Dame's Irish Guard during his junior and senior years of college. He continued to root for his beloved Fighting Irish and did his best to instill a love of Notre Dame football in his children and grandchildren. Bob was predeceased by his parents Margaret (nee Howard) and Robert Welly. He is survived by his sons Nicholas (Emily), Burton (Kinley), and Timothy, and his six grandchildren Piper (10), Reagan (8), Catherine (7), Elizabeth (5), Caroline (4), and Conrad (3), and his ex-wife Lyn Naumann (Charles). A Memorial Mass will be held on April 24, 2021 at 11:00 a.m. at St. Patrick of Heatherdowns Catholic Church. Interment will be at Resurrection Cemetery. Coyle Funeral Home is assisting with arrangements. In lieu of flowers, please consider donating to the Historic South Initiative , Mosaic Ministries , or the Ohio Community Theater Association .

Robert (Bob) Howard Welly (age 70) of Toledo, OH passed away on his birthday, January 11. Bob was a member of the inaugural class of St. John's Jesuit High School (1969), and a graduate of the University of Notre Dame (B.A., 1973) and The University... View Obituary & Service Information

The family of Robert Howard Welly created this Life Tributes page to make it easy to share your memories.

Send flowers to the Welly family.