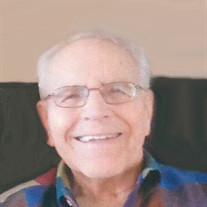 Robert Stebli, 91, passed peacefully away on August 31, 2017. He was born in Toledo, Ohio on October 31, 1925 to Joseph and Veronica (Rowan) Stebli. Robert proudly served his country in the U. S. Navy during WW II. Robert worked as a Mechanical Engineer for the Toledo Blade. He loved singing in his church choir. Robert was an avid fan of Notre Dame, University of Toledo and Ohio State football, as well as watching all college sports. He served as the past President of the Plant Engineers of NW Ohio. He and his late wife Mildred enjoyed ballroom dancing at the Westchester Dance Club. They also enjoyed traveling the United States and Europe together. He was proud to have visited his 50th state, North Dakota, just last year for his 90th birthday. Robert is survived by his five children; Richard (Karen) Stebli, Joseph (Barbara Balcar) Stebli, Jeanine Rusch, Regina (Michael) Burton and Michael (Amy) Stebli. These children graced Robert with ten grandchildren and in-turn, another nine great-grandchildren. His grandchildren are Laura (Jason) Haley, Rachael Stebli (Jessica Standley), Sarah (Ryan) Pudlowski, Kristopher (Elizabeth) Stebli, Caitlin (Daniel) Larkin, Peter Stebli, Margaret Stebli, Amanda Burton, Nicholas Stebli and Alyssa Stebli; great-grandchildren, Jacob, Lucas, and Maxwell Haley, Brody and Beau Pudlowski, Evan and Ava Stebli, and Vivienne and Jack Larkin. Robert was preceded in death by his parents, his wife Mildred, and his brother Joseph Stebli. Friends may call upon the family at the Coyle Funeral Home, 1770 S. Reynolds Rd. on Tuesday, September 5, from 2:00 - 8:00 p.m., with a Scripture Service at 7:00 p.m. The funeral will begin in the mortuary on Wednesday, September 6 at 9:30 followed by a mass at St. Patrick’s of Heatherdowns Catholic Church at 10:00 a.m. Robert will be laid to rest at Resurrection Cemetery. The Stebli Family requests that contributions be made to St. Patrick’s of Heatherdowns Catholic Church. Please leave a condolence message at CoyleFuneralHome.com.

Robert Stebli, 91, passed peacefully away on August 31, 2017. He was born in Toledo, Ohio on October 31, 1925 to Joseph and Veronica (Rowan) Stebli. Robert proudly served his country in the U. S. Navy during WW II. Robert worked as a Mechanical... View Obituary & Service Information

The family of Robert Stebli created this Life Tributes page to make it easy to share your memories.

Send flowers to the Stebli family.