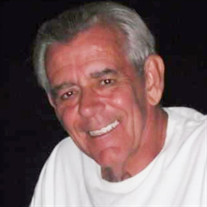 Our feisty family member, Robert Zender Stark, passed on October 9th, 2020 peacefully in his home. He was born to Alma and Zender Stark on January 17th, 1942. At the young age of five, he contracted polio and found himself in an iron lung for nearly a year. Despite this unfortunate disability, he proceeded to thrive and fight. In fact, his high school friends (Cotter, Moore, Dunphy, McGuire, Kaszynski, and more) may say he instigated situations they would have to finish. At 18, he met a beautiful young lady, Dorothy Stark (Mierzejewski), with whom he married. They raised four children together Lori Spies (Stark), Jacqueline Stark-Fuller (Timothy Fuller), Robert Zender Stark Jr., Katherine Stark (Monte Zarick). They enjoyed many fun years golfing, coaching softball teams and rotating parties with family and friends. The second love of his life, Lorri Zuccarell Stark came along in 1984 with her sons, Joseph Zuccarell (Kristi Smith), and Stephen Zuccarell who he accepted with open arms. They enjoyed thirty-five loving years together, sharing adventures in travel, playing in ma and pa golf leagues, laughing together and enjoying their grandchildren that they deeply cherished. Robert worked at various places in the Optical industry, including the Toledo Health and Retiree Center where he was loved by many before he eventually took a risk and bought Leslie Opticians in the Spitzer Arcade. His last passion in his industry was working in the VA in both Toledo and Ann Arbor where he fit and loved the Veterans. Bob thoroughly enjoyed playing pool and golf, eventually teaching himself to play the game from his scooter. He persevered through so many surgeries and challenges modifying his desires to meet what he could physically do without self-pity. Bob and Lorri had an extensive network of friends and truly appreciated the quality time spent with them golfing, vacationing, playing cards, and more. Bob was a loving Husband, Father, Brother, Uncle, Grandpa, and Papa. He was deeply involved in the lives of his grandchildren, Alexandria (Joseph) King, Matthew Spies, Nicolas Fuller, Christopher Spies, Madeline Fuller, Melissa Spies, Joseph Zuccarell , Lorisa Zuccarell, Amanda (Brent) Schaefer, Ashley Smith, and great grandfather to Wyatt. Bob was a man of faith and demonstrated that with his love for family and friends. The family would like to thank all those who helped in his care, especially Leo Gillaspie, and Heartland Hospice. Preceded in his death were his parents, sisters Betty Reichart-Ballard and June Tiell; mother-in-law, Barbara Wysocki, and brother-in-law Michael Wysocki. Friends may visit at the Coyle Funeral Home, 1770 S.Reynolds Rd. on Sunday, October 18th, 2020 from 11 a.m. - 3 p.m., with the Funeral Ceremony following. Covid precautions will be observed. Memorial contributions may be given to Operation Smile.(www.operationssmile.org ) Please leave a condolence message for the family and view Bob's video tribute at CoyleFuneralHome.com.

Our feisty family member, Robert Zender Stark, passed on October 9th, 2020 peacefully in his home. He was born to Alma and Zender Stark on January 17th, 1942. At the young age of five, he contracted polio and found himself in an iron lung... View Obituary & Service Information

The family of Robert Zender Stark created this Life Tributes page to make it easy to share your memories.

Send flowers to the Stark family.