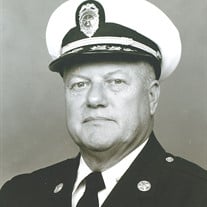 Robert J. Schwanzl, 87, of Maumee, OH died peacefully at home on July 10. Bob was born June 14, 1933 in Toledo to the late Wilbur and Alma (Lammers) Schwanzl. He married Carolyn Murray on his birthday in 1958 at Good Shepherd Catholic Church and always commented that he got the best “present” he ever had on his 25th birthday. They celebrated 53 beautiful years together before Carolyn passed away in July of 2011. Bob grew up on Vermont Avenue, attending old St. Mary’s and Central Catholic High School, graduating in 1951. He was a sergeant in the US Army, stationed in Washington, DC and worked in intelligence during the Korean War. Following his military service, he returned to Toledo and worked a series of jobs, eventually meeting his future bride Carolyn at a dance hall named Club My Own in 1956. Bob decided to take both the fire and police exams, with the fire department calling him first, where he proudly served for the next 40 years, retiring in 1998. Bob truly loved his job, ultimately ascending to Assistant Chief in 1994. He often said, “it’s not work if you love what you do”. He had a variety of responsibilities in the fire service, including the training bureau. He was proud to have overseen the first female firefighters complete their training and to support the creation of the TFD’s water rescue unit. Following his graduation from Owens Tech with a degree in their inaugural Fire Science class he also worked as a fire science instructor at Owens for fifteen years. His passion for the fire service was only exceeded by his passion for his family. He adored Carolyn, his “one and only”, and they were blessed with four children, sixteen grandchildren to whom he was “Grandpa Chief”, and three great grandchildren, who dubbed him “Papa Chief”. Late in his career, Bob became highly involved with the Toledo Firefighters Museum, and has been President since 1993. His family and extended family always enjoyed trips to the Museum, listening to Chief explain the exhibits with enthusiasm and pride. This was especially true when he and the other volunteers were able to locate a new artifact from other museums or private owners. Bob also became deeply involved in his church, St. Joe’s of Maumee. He was a frequent lector and usher and an active member of the Knights of Columbus, serving as Grand Knight in 2016. He also enjoyed traveling, whether it was to visit his children and grandchildren or to visit Ireland where at 85 years old he kissed the Blarney Stone, or Rome, where he was able to see the Pope for a second time in his life. Bob will always be remembered for his love and commitment to his family, friends, and colleagues. He was a man of integrity and an inspiration to countless people throughout his life yet demonstrated humility and kindness always. Whether commanding a scene, teaching a class or telling a story he had a voice that cannot be forgotten. We love you Chief. Bob is survived by his children Michael (Suzanne) of Mattawan, MI, Joseph (Shari) of Rockford, MI, Dr. Marie (Phil) Mason of Fairmont, WV, and Angela (Ed) Schweickert, of Sylvania, fifteen grandchildren, three great grandchildren, sister Janet Molik of Toledo and brother-in-law Terry Fravor of Oregon. He was preceded in death by his wife Carolyn and grandson Andrew. Visitation will be held at the Coyle Funeral Home, 1770 S. Reynolds Rd. on Wednesday July 15, 2020 from 2: 00 pm to 8:00 pm with the Last Alarm service at 7pm. Funeral Services will be held on Thursday July 16 beginning at 9:30 am in the mortuary followed by the Mass of Christian Burial in St. Joseph Church, Maumee at 10:30 a.m. Interment will take place in St. Joseph Cemetery, Maumee. Social distancing guidelines will be observed, and visitors are required to wear a mask. Memorial contributions may be made to the Toledo Firefighters Museum or St. Joseph Catholic Church in Maumee, Ohio. Please view and sign the guest registry at coylefuneralhome.com

Robert J. Schwanzl, 87, of Maumee, OH died peacefully at home on July 10. Bob was born June 14, 1933 in Toledo to the late Wilbur and Alma (Lammers) Schwanzl. He married Carolyn Murray on his birthday in 1958 at Good Shepherd Catholic Church... View Obituary & Service Information

The family of Robert Joseph Schwanzl created this Life Tributes page to make it easy to share your memories.

Send flowers to the Schwanzl family.