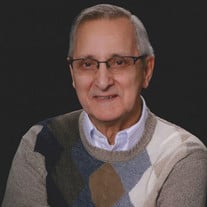 Robert M. Garcia, 78, passed away September 16, 2020, surrounded by his loving family after a long illness with silicosis. Bob was born April 27, 1942 in Tampa, FL. He attended Immaculate Conception after moving to Toledo in 1952, graduating in 1956. He then graduated from St. Francis High School in 1960. Bob proudly served his country in the U.S. Navy from 1960-1964. He also earned an Associate’s Degree from Owens Community College in 1975. Bob worked as a foreman at Ransom & Randolph where he met his future wife, Linda Kuney, in 1966. They were married January 21, 1967. They have four children and five grandchildren. When the kids were growing up, Bob was busy coaching his kids’ sports teams and, later, his granddaughter, Breanna. He also worked at Schwartz Hardware, AGA Gas, and Muller Pipe Organ. Most recently, he worked as a Bus Aide for Toledo Public Schools. Bob enjoyed attending his grandkids’ sporting events and activities. He was also an avid bowler, golfer, and fisherman. He was a longtime parishioner of Our Lady of Perpetual Help Church and was also a member of the Maumee Eagles. Bob was preceded in death by his parents, Mike and Olga Fernandez; Aunt, Delia Pantoja and cousin, Anthony “Sonny” Pantoja. He is survived by his loving wife of 53 years, Linda; their children, Tony (Ann), Joel (Mary), Amy Legree (Jason), and Rick; grandchildren, Breanna Legree and Sam, Alex, Abby, and Lily Garcia; Uncle, Louie Pantoja and cousins, Sylvia (Joe) Forthome and Louie (Diane) Pantoja. Visitation will be held at Coyle Funeral Home, 1770 S. Reynolds Road from 2:00 p.m. to 8:00 p.m. on Monday, September 21 with a Prayer Service at 7:00 p.m. A Funeral Mass will be held at Our Lady of Perpetual Help Church, 2255 Central Grove Ave., Toledo, OH 43614, at 10:00 a.m. on Tuesday, September 22. Interment will be private. The family would like to extend a special thank you to the nurses from Ohio Living Hospice, especially Nicole and Keisha, for their compassionate care. The family requests that any tributes in Bob’s name be made to Ohio Living Hospice, 1730 S. Reynolds Rd., Toledo, OH 43614 or Our Lady of Perpetual Help Church. Please view and sign our online “guest registry” at CoyleFuneralHome.com

Robert M. Garcia, 78, passed away September 16, 2020, surrounded by his loving family after a long illness with silicosis. Bob was born April 27, 1942 in Tampa, FL. He attended Immaculate Conception after moving to Toledo in 1952, graduating... View Obituary & Service Information

The family of Robert M. Garcia created this Life Tributes page to make it easy to share your memories.

Send flowers to the Garcia family.