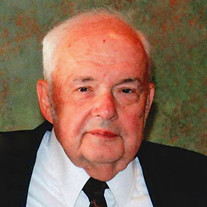 Robert John Corey of Toledo, age 81, passed away at Hospice of Northwest Ohio Thursday, January 18, 2018. Bob was born May 20, 1936 in Warren, Ohio to Forest and Ruth (O'Neil) Corey. He graduated from Warren Harding High School and earned a degree in Dairy Technology from Ohio State University. After graduating, he served in the Army at Walter Reed Hospital in Washington DC. Bob married Annette Hoffmann July 4, 1964. Together for 53 years, they raised three children and had eight grandchildren. Bob worked at State Farm for 26 years. He enjoyed working for State Farm and kept in touch with his co-workers by going to lunch weekly. After retiring in 1995, Bob enjoyed traveling with Annette and his youngest daughter Anne. He inherited his love of travel from his mom. Bob traveled across the US and throughout the world. Adventures took him to France, London and Switzerland. After Annette could no longer travel, he journeyed alone to Thailand and China, where he walked the Great Wall of China. During retirement, Bob was also an avid walker. Rain or shine, he walked four miles a day in the park. He also enjoyed going to dinner with Annette to many local restaurants where the staff knew Bob by name. He also volunteered his time delivering mobile meals for ten years, in remembrance of his mom. His oldest grandson, Corey, delivered meals with him one day admiring how he kindly talked with each person. This was special as Bob had a very quiet, reflective nature. During his life, Bob accomplished many things, but most important to him was his wife and family. Holiday gatherings with the family were times he cherished. He also took care of many family members over the years, including his mom and her two sisters as they aged. He will be remembered fondly for his kindness to his family. Robert was preceded in death by his parents and son, Michael. He is survived by his loving wife, Annette, daughters Catherine (Randy) Selhorst, Anne (Robert) Heninger, grandchildren; Corey (Jessica), Samantha, Timothy, Marainna, Rachel, Lisa, Lori and Jacob. Friends may visit at the Coyle Funeral Home, 1770 S. Reynolds Rd., on Tuesday, January 23 from 3-8 p.m. where a Rosary Service will be recited at 7 p.m. Funeral Services will be held on Wednesday, January 24 beginning at 9:45 a.m. in the mortuary, followed by a Funeral Mass at St. Rose of Lima Church at 10:30 a.m. Interment will be at St. Rose Cemetery. Please leave a condolence message for the family at CoyleFuneralHome.com

Robert John Corey of Toledo, age 81, passed away at Hospice of Northwest Ohio Thursday, January 18, 2018. Bob was born May 20, 1936 in Warren, Ohio to Forest and Ruth (O'Neil) Corey. He graduated from Warren Harding High School and earned a... View Obituary & Service Information

The family of Robert Corey created this Life Tributes page to make it easy to share your memories.

Robert John Corey of Toledo, age 81, passed away at Hospice of...

Send flowers to the Corey family.