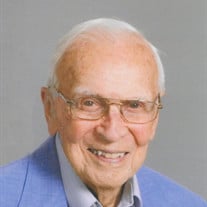 Robert R Burnard, age 94 died peacefully Saturday Feb 6, 2021 in his home surrounded by his family. He was born July 6, 1926 in Toledo, Ohio to Catherine (Kluge) and Charles Burnard. Bob attended Gesu grade school and then graduated from Central Catholic High School in 1944. Lifetime friendships formed in those school days were continued in his retirement, including weekly lunches with his dear friends. Upon high school graduation, Bob joined the US Navy in service to his country, like so many of the greatest generation. He was stationed in Hawaii, and then the Philippines, and was honorably discharged. The GI bill allowed for a four year college education and Bob graduated with a degree from the College of Business, University of Toledo. On May 12, 1956, Bob married Jane Rectenwald at St Joseph Catholic Church, Maumee. They raised three children. Dad, believing actions were more important than words, lived a life of integrity, gentleness, honesty, and faith. We, his family, always knew we were loved. Bob began working at the age of 11, pedaling handbills. After college, he was employed by the Lions Store as a buyer. He worked at Tiedke's Department Store in carpeting and flooring as a salesman, then moved from retail into wholesale at Seaway Distributing, becoming vice president and general manager. He was respected by his colleagues and coworkers. He continued working with Pricscilla D'Anniballe in flooring for restoration and remodeling of commercial properties. Believing that work gave purpose to life, he did not fully retire until age 80. He continued to find his purpose volunteering at soup kitchens in Florida and as an usher at St Patrick's of Heatherdowns. Euchre, Poker and Bridge were his games along with ping pong, pool and shuffle board. Dad enjoyed playing tennis until age 85 and golf until age 90. Winter months were spent in Siesta Key and North Fort Myers, Florida where again deep and lasting friendships formed. In his last weeks and days, Dad showed us all how to gracefully let go, accepting help with humility. His mind remained sharp until the very end. Even when he could no longer speak, he communicated with his eyes-bright, sparkling, smiling and full of grace. Bob is survived by his wife of 64 years, Jane, and their children Karen (Michael Jackson), Robert M. and Julie (Bill Toney), grandchildren Johanna Jackson, Dan Jackson (Kristin Haudek), Nick Toney (Marian), Jocelyn Toney Morin (Nick), greatgrandchildren Genevieve, Ira and Bennett, and special niece and nephew Donna and John Thomas. Bob was preceded in death by his parents, and brothers Charles and Richard. The family is deeply grateful for Bob's caregivers, including Dr. Jeffrey Lewis and nurse Gladys, and Hospice of Northwest Ohio including his caregiver Duane Delaney and nurse Christine Mercer. We are ever thankful for family and friends who visited, bringing their conversation, companionship, and shared memories which enriched these final months of a life well lived. The visitation will be at Coyle's Funeral Home, 1770 S. Reynolds Rd. on Friday, February 26th from 4:00 - 6:00 p.m. with a Rosary service following. The funeral will begin in the mortuary on Saturday, February 27th at 10:30, followed by a celebration Mass of Christian burial at St Patrick's Heatherdowns at 11 a.m. Facial coverings and social distancing will be required at all gatherings. The mass can be viewed through live stream at toledostpats.org. In lieu of flowers, memorial donations may be made to Hospice of NW Ohio, 800 S. Detroit Ave. Toledo, OH 43609 or St. Patrick's of Heatherdowns church, 4201 Heatherdowns Blvd. Toledo, OH 43614. Please leave a condolence message at CoyleFuneralHome.com.

The family of Robert R Burnard created this Life Tributes page to make it easy to share your memories.

Send flowers to the Burnard family.