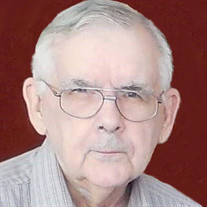 Richard "Dick" Glen Topping passed away peacefully on November 8, 2020. Richard was born in Toledo, Ohio November 9, 1931 to to Robert and Florence Lillian (Scott) Topping. He attended Waite High School in Toledo graduating magna cum laude. Richard married Claudia Borucki in 1951 and raised a son and a daughter. After this marriage ended, Richard met and married the love of his life, Barbara Johnson and together, they raised Barbara's 5 daughters and 1 son. They were married 45 years. Richard's first job was putting books away at the Locke Branch Library for 35 cents/hour. From his teen years on, his interest gravitated to electronics and mechanics. He could repair anything. Richard was a proud member of Local 50 Plumbers and Pipefitters Union starting in the trade in 1949 following in his Uncle Don's footsteps. He began his apprenticeship with Gladieux Plumbing and Heating and later worked out of the Local for various contractors on many major projects including Chevy Powertrain, Holiday Inn, Radisson Hotel, Franklin Park Mall, Monroe Power, Davis Bessie, Fermi II, Jeep, UTMC, and Flower Hospital to name a few. He served as foreman on some and retired from plumbing in 1989. Richard was happiest when he could build something or spend time with his family. He always said, "my family is the most important thing in the world to me." Richard and Barbara enjoyed western style dancing so much that Richard became a caller and started his own square dance club called The Spinning Tops. Preceding him in death are wife Barbara Topping, parents Robert and Florence Topping, son Stephen Topping, sister Jeanne Brahier, brother in law Stanley Brahier. Surviving are daughter, Pamela (Gary) Kile, step daughters, Laura, Theresa, Judith and Pamela Johnson, Melissa (Jeffrey) Miller, step-son Steven Johnson, daughter-in-law Kathryn Shortridge, 7 grandchildren, 9 great grandchildren, sister in law Kathleen Flanagan and brother in law John (Lou Ann) Borer. Visitation will be Thursday, November 12th from 4-8 p.m. and Friday noon-1:30 p.m. at Coyle Funeral Home, 1770 S. Reynolds Rd. The funeral will begin at Coyle at 1:30 p.m. followed by Mass at 2:00 p.m. on Friday, November 13th at St. Patrick of Heatherdowns Church. A memorial celebration and interment will be scheduled at a later date. Special thanks to Gabby and all the 7th Floor nurses at Flower Hospital.Memorial donations may be given to St. Patrick of Heatherdowns Church or to a charity of the donor's choice. Please view Richard's memorial video tribute and leave a condolence message at CoyleFuneralHome.com.

The family of Richard Topping created this Life Tributes page to make it easy to share your memories.

Send flowers to the Topping family.