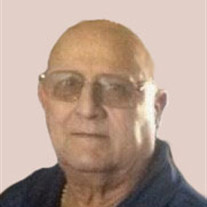 Richard A. Schroeder “Monk” age 86, passed away on Saturday, November 2, 2019 in Hospice of Northwest Ohio. He was born on April 2, 1933 in Toledo, Ohio to John and Lucille (Couturier) Schroeder.Richard graduated from Libbey High School in 1951. After high school he attended Heidelberg College in Tiffin, Ohio where he majored in Music Education-Vocal. He also attended Bowling Green State University where he earned a B.S. in Education, plus Graduate hours. Richard was also a Private 1st class in the U.S. Army. Richard was employed by the Toledo Public School System, namely Jones Junior High School ("Three cheers for our Jones Jr. High...") for 37 years where he was choir director-musical director-athletic director. Richard was also a track coach at Bowsher High for 25 years, and he was the softball and youth baseball director at the Lucas County Rec. Center for 15 years.Richard enjoyed Basketball, Football, Baseball, and Softball. He really loved watching his "Ohio State Buckeyes"! (Go Bucks!). His significant accomplishments were being on the Radio and T.V. as a professional soloist, and a much loved choir teacher by all his students.Richard is survived by his brother, John F. Schroeder of Tacoma, Washington; niece, Becky and nephew, Bob of Tacoma; step-niece, Barb and step-nephew, David of Toledo; nieces and nephews, William (Julie); Elizabeth; Kathryn (Chan); Norman (Susan); and Carl (Kimmy), all of Toledo whom he treated like his own children, since he never married, nor had children of his own. He was also survived by many great and great-great nieces and nephews; best friends, George Rodriguez and Jack Mattimore and he will be sadly missed by his sweet puppy "Abbey". Richard was preceded in death by his parents, sister Karleyne; brother-in-law, Jack and sister-in-law, Joanne.Visitation for family and friends will be Thursday, November 7, 2019 from 2:00-8:00 p.m. at the Coyle Funeral Home, 1770 S. Reynolds Rd. Toledo, Ohio 43614. Funeral services will be held, in the mortuary, on Friday, November 8, 2019 at 11:00 a.m. Graveside services will be immediately following at Resurrection Cemetery located at 5725 Hill Ave. Toledo, Ohio 43615.In lieu of flowers, donations in Richard's name may be made to Hospice of Northwest Ohio-Perrysburg. Please view and sign our online “guest registry” at CoyleFuneralHome.com

Richard A. Schroeder &#8220;Monk&#8221; age 86, passed away on Saturday, November 2, 2019 in Hospice of Northwest Ohio. He was born on April 2, 1933 in Toledo, Ohio to John and Lucille (Couturier) Schroeder.Richard graduated from Libbey High... View Obituary & Service Information

The family of Richard Arlen Schroeder created this Life Tributes page to make it easy to share your memories.

Send flowers to the Schroeder family.