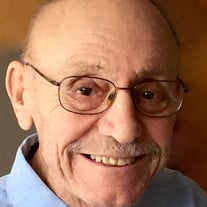 Richard Charles Schnapp, retired Toledo firefighter and concrete contractor, died Oct. 16, 2017, at Arden Courts in Westlake, Ohio. He was 83. A lifelong Toledoan, Dick was born Aug. 4, 1934 where he was raised by his parents Eunice and Peter Schnapp. He was a proud 1953 graduate of Libbey High School, and it was there that he met Maradell Karchner. The high school sweethearts were married on May 26, 1956. Fifty years later, they would celebrate their milestone anniversary with a party at the Maumee Theatre. The newlyweds settled in the south end, but the Army had other plans. Dick was drafted, serving as a sergeant in West Germany from 1957-59. In 1961, Dick joined the Toledo Fire Department and worked at several stations including 1, 5, 9 and 21, mostly as a pumper driver. On the morning of Sept. 9, 1980, he got a call he would never forget: The steeple of the Historic Church of St. Patrick downtown was ablaze after a lightning strike. The steeple was destroyed, but the firefighters saved the church. Dick retired from the department in 1987. When he wasn’t fighting fires, Dick ran RC Schnapp Concrete Construction, where his perfectionist and hardworking nature served him well. He poured driveways, sidewalks and footers for basements all around Toledo and Maumee. Dick had a passion for golf. He played regularly with a group of friends who dubbed themselves “the Dirty Dozen.” He racked up three holes-in-one, two of them at South Toledo Golf Club, where he was a longtime member. All those years in firehouses cultivated a love of cooking, and Dick’s skills in the kitchen made family meals special. His chili was legendary. Dick belonged to the Plasterers’ and Cement Masons’ Local 886, the International Association of Fire Fighters Local 92, and the Maumee-BG Elks Lodge 1850. He was preceded in death by his wife Maradell in 2007. Survivors include daughters Terri (Ken) Johnson of Shaker Heights, Ohio; Tracy Schnapp of Toledo; and Tamara (Joe) Zawodny of Fairview Park, Ohio; grandsons Brian Johnson, Jacob Zawodny, Mitchell Zawodny and Maxwell Zawodny; and a brother, Gary (Vickie). Friends may visit at the Coyle Funeral Home, 1770 S. Reynolds Rd., on Thursday October 19, 2017 from 2-8pm. where a Last Alarm Service will be held at 7 pm. Funeral services will be held on Friday October 20th. beginning at 11am in the funeral home. Interment will follow in Ft. Meigs Cemetery, Perrysburg. Memorials may take the form of contributions to the Alzheimer’s Association. Please view and sign the guest registry at coylefuneralhome.com.

Richard Charles Schnapp, retired Toledo firefighter and concrete contractor, died Oct. 16, 2017, at Arden Courts in Westlake, Ohio. He was 83. A lifelong Toledoan, Dick was born Aug. 4, 1934 where he was raised by his parents Eunice and Peter... View Obituary & Service Information

The family of Richard Charles Schnapp created this Life Tributes page to make it easy to share your memories.

Send flowers to the Schnapp family.