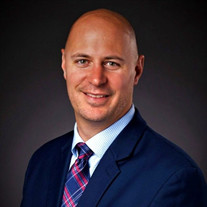 Richard John Reucher, III of Wauseon passed away tragically at the age of 35 on August 28th, 2020 following a car accident. Ricky, as he was known by many, was born and raised in Toledo by his loving parents Rick and Sharon Reucher. Ricky attended Central Catholic High School where he played basketball and was a City League Champion high jumper. Ricky continued his basketball career at Bluffton University where he studied accounting and met the love of his life in his wife, Allie Gingerich. After Bluffton, Ricky and Allie married and started their family together. Nothing was more important to Ricky than his family. Ricky was a loving husband to Allie and a loving father to his daughter Brooklynn Mae (6) and his son Harrison John (1). Ricky worked as the Assistant Treasurer for Toledo Public Schools and truly was TPS Proud. Ricky will be remembered by many for his sense of humor, his passion for music and golf, and his infectious spirit. Whether it was a weekend at the lake, a summer day by the pool, a Michigan tailgate in the fall, or an afternoon round of golf, Ricky was always the life of the party. Ricky is survived by his wife Allie, daughter Brooklynn, son Harrison, parents Rick and Sharon Reucher, in-laws Brent and Rhonda Gingerich, sister Lisa (Brian) Craig, brothers-in-law Chase (Mary) Gingerich and Jordan Gingerich, nephews Jake and Max Craig and Carson Gingerich, grandmothers Harriet Kessler and JoAnne Maran. Ricky also leaves behind many dear family members and countless friends who loved him. He was predeceased by his grandfathers Richard John Reucher Sr., Eugene Kessler, and Anthony Maran. The Ricky Reucher Memorial Fund has been established to support Allie, Brooklynn, and Harrison during this difficult time. Donations may be made payable to the “Ricky Reucher Memorial Fund” and delivered either in person at the Visitation or by mail to Trust Company Family Offices, c/o Brian Craig, 1630 Timberwolf Drive, Holland, Ohio 43528. Friends may visit at the Coyle Funeral Home, 1770 S. Reynolds Rd. on Friday, September 4th, 2020 from 2:00 – 8:00 p.m. A Funeral Mass will be held at St. Joan of Arc Catholic Parish on Saturday, September 5th, 2020 at 11:00 a.m. where the family will receive guests beginning at 10:00 a.m. Due to COVID-19 restrictions, masks will be required. The Funeral Mass will also be live streamed via St. Joan of Arc’s YouTube channel. A celebration of life will be planned at a future date. Interment will be at Roth Cemetery, Monclova Township. Please view Ricky’s Memorial Video and leave a condolence message for the family at www.coylefuneralhome.com.

Richard John Reucher, III of Wauseon passed away tragically at the age of 35 on August 28th, 2020 following a car accident. Ricky, as he was known by many, was born and raised in Toledo by his loving parents Rick and Sharon Reucher. Ricky... View Obituary & Service Information

The family of Richard John Reucher created this Life Tributes page to make it easy to share your memories.

Richard John Reucher, III of Wauseon passed away tragically at...

Send flowers to the Reucher family.