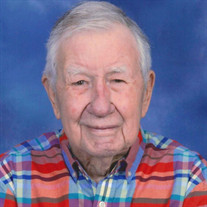 Richard Henry Rectenwald, 92, of Holland, passed away on September 7, 2020. He was born January 2, 1928 in Perrysburg, Ohio to Henry and Bertha (Wershing) Rectenwald. He was married to Kathleen (Wahmhoff) on June 11, 1955. She preceded him in death. Richard “Dick” was the epitome of a family man. He loved his children, grandchildren, great grandchildren, nieces and nephews more than anything. They were the only ones that could keep him away from his beloved Kathleen for almost six years after her death. If you knew Dick, you knew that God, his family and work were important to him. Several people found it fitting that he passed on Labor Day. He was an extremely hard worker as he had to be, after all, he had six children to feed! After spending two years in the US Army during the Korean War, he started his own company shortly after getting married and he eventually incorporated it as Ohio Excavating in 1975. The hard working farm boy from Perrysburg would go on to build that business, have six children, fourteen grandchildren, five great grandchildren, travel the world, and spend the winter months in Florida. On their first date in the summer of 1954, he took Kathleen to Cedar Point. Evidently, the date went well, as it has become our family’s favorite tradition to spend one weekend there a year. He was always willing to go anywhere or do anything, all you had to do was ask and you were going to get a “well sure” in reply. Take a pontoon boat ride, he was there. Dinner at Loma Lindas, not even COVID could keep him away. Play Euchre, Skip Bo or Dominoes, he’d beat you to the table! Oh, and that sweet smile. You have never met anyone that could make you feel the way he could with just a smile. So easy to laugh, especially at himself! We never questioned that man’s love for us, his smile said it all. Richard is survived by his twin sisters, Rose Schwind and Rosella (Mickey) Hoffman and his brother-in-law, Glenn Schwind. His children Renee Fisher (Tom Bevens), Rick Rectenwald, Mary Pat (Rich) Graven, Lisa (Greg) Nowak, Kelly Carver (Michael Huss), and Jason (Kristen) Rectenwald. His grandchildren, Aaron (Amanda) Graven, Matthew (Kim) Graven, Wesley Fisher, Chad (Lindsay) Graven, Amanda (Scott) Levitt, Kaitlyn Rectenwald, Maggie Rectenwald, Zach (Kara Behnfeldt) Graven, Alec Huss, Emily Huss, Max Carver, Jack Carver, Nate Rectenwald, and Chloe Rectenwald. Great grandchildren, Abby Johnston (Matt and Kim Graven), Ava and Ana Graven (Aaron and Amanda), Avery and Malia Graven (Chad and Lindsay). He was preceded in death by his sister, Irene Schivelbein; her husband, John Schivelbein; brother, Thomas Rectenwald; son-in-law, George Fisher and Kathleen’s beloved sisters and their spouses. Unfortunately, we were unable to hold a large gathering with family and friends to celebrate Dick’s life. A private mass was held at Our Lady of Lourdes Church followed by an Entombment at Resurrection Cemetery on Friday, September 11th. We ask that any donations be made on his behalf to a charity of your choice. If you feel the need to do more, toast him with your favorite cocktail or try a pull on a slot machine in Dad’s honor. As Dad would always say, “Goodbye and I Iove you!” Please view and sign our online “guest registry” at CoyleFuneralHome.com

Richard Henry Rectenwald, 92, of Holland, passed away on September 7, 2020. He was born January 2, 1928 in Perrysburg, Ohio to Henry and Bertha (Wershing) Rectenwald. He was married to Kathleen (Wahmhoff) on June 11, 1955. She preceded him... View Obituary & Service Information

The family of Richard Henry Rectenwald created this Life Tributes page to make it easy to share your memories.

Richard Henry Rectenwald, 92, of Holland, passed away on September...

Send flowers to the Rectenwald family.