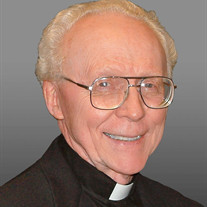 Rev. Richard L. McLernan, OSFS, passed away on October 4, 2017 at Rosary Care Center in Sylvania, OH at the age of 87. Fr. McLernan was born to Augustine and Mary (Bracelin) McLernan on December 8, 1929 in Philadelphia, PA. He earned a Bachelor Degree in Classical Languages from Niagara University in 1954, a Licentiate of Sacred Theology from the University of Fribourg in 1958 and a Master Degree in Chemistry from the University of Notre Dame in 1963. He made his first profession as an Oblate of St. Francis de Sales in 1948 and was ordained to the priesthood on July 14, 1957. After ordination Fr. McLernan began a long career in Catholic education. He taught at DeSales High School, Lockport NY until 1964, Fr. Judge High School, Philadelphia, PA, until 1966, St. Francis de Sales High School, Toledo, OH, where he was also Dean of Students, until 1973, Judge Memorial High School, Salt Lake City, UT until 1980 and Lumen Christi Catholic High School, Jackson, MI until 2005. He served as the archivist of the Toledo-Detroit Province from 2005-2011. Fr. McLernan is remembered for his excellent preaching. His homilies were recently compiled and published in two volumes by EmbracedbyGod.org. He was a brilliant, fair and demanding science teacher. Graduates often came to appreciate his high school classes during college or in their science-related careers. He was an avid reader and lifetime scholar. Fr. McLernan was preceded in death by his parents Augustine and Mary (Bracelin) McLernan, brothers Rev. Daniel McLernan, OSFS, John, Joseph, and Robert, and sisters Catherine and Marie. He is survived by his sisters-in-law Jean (Robert) and June (Joseph) McLernan, twenty-three nieces and nephews and many great nieces and nephews. The Mass of Christian Burial will be celebrated at Our Lady of Fatima Church, 911 Napoleon Road, Michigan Center, MI on Tuesday, October 10 at 7:00 PM. The Church will open at 6:00 PM for visitation. Interment will take place at 8:15 AM on Wednesday, October 11 at Resurrection Cemetery, 5725 Hill Ave., Toledo Ohio. In lieu of flowers, memorials may be made to the Oblates of St. Francis de Sales Retirement Fund, Our Lady of Fatima Church, Lumen Christi Catholic School or St. Francis de Sales School. Coyle Funeral Home is assisting with arrangements. Please view and sign the online registry at CoyleFuneralHome.com.

Rev. Richard L. McLernan, OSFS, passed away on October 4, 2017 at Rosary Care Center in Sylvania, OH at the age of 87. Fr. McLernan was born to Augustine and Mary (Bracelin) McLernan on December 8, 1929 in Philadelphia, PA. He earned a Bachelor... View Obituary & Service Information

The family of Rev. Richard McLernan, OSFS created this Life Tributes page to make it easy to share your memories.

Send flowers to the McLernan, family.