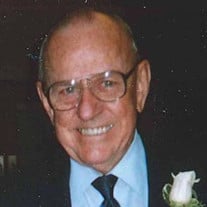 Richard passed peacefully on February 16, 2017 at the Elizabeth Scott Community, where he had resided for the past year. Richard was born to Anna and Alphonse Martel on January 12, 1930 in Manchester, New Hampshire. He graduated from St. Anselm College in Manchester with a degree in chemistry and mathematics. He soon met a lovely young lady, Elizabeth and they married in 1952. In 1954, along with their first daughter, Richard and Liz ventured west to California, where Richard worked as a research chemist at Hughes Aircraft and Liz attended to their growing family. Richard and Liz were both very involved in their Catholic Church activities and raising their seven, later eight, children. After a move to Toledo to work at Owens Illinois in 1968, they were again very active at their church, St. Jude. Corporate downsizing at O-I in 1979 meant a new job and a move to Rochester, N. Y. for work in research and development at Xerox. Richard retired from Xerox in 1993 and moved back to Toledo where most of the family resided. Richard was passionate about science, with an unending curiosity about our world. He received several awards for his research, earning ten U.S. patents in the fields of electronic display devices and unique materials applications. Driven by his Catholic faith, Richard was generous with his time, talent, and treasure. Family time was always most important to him. He loved camping with Liz and the children in the Sierra Nevada Mountains and traveling the country with them from California to Maine. His favorite sites were the canyons in Utah, as he marveled at God's wonderous creations. Richard was an early adopter of the new machines called computers, building and using them to make life better. As a scientist, he was the consummate labeler and organizer, believing that "everything has its place". Even to the end of his life, Richard kept up with world events. And, not least, he made the world’s best potato chip dip and milkshakes. He will be dearly missed. Richard is survived by daughters, Barbara (Keith) Wilkowski, Judy (Tom) Elton, Diana Ganues, Joanne (Dave) Fruth, sons, Richard Jr. and David, 15 grandchildren (Erica, Emily, Greg, Joe, Joshua, Richard, Nathan, Kevin, Kelly, Kyle, Christina, Jamie, Brett, Kayla, and Brandon) and 28 great-grandchildren. In addition to his parents, Richard was predeceased by his wife Elizabeth, sons, Michael and Robert, great-grandson Connor, and sister Lorraine. The family thanks the Elizabeth Scott Community and Hospice of NW Ohio for the outstanding care and support they provided to Richard and his family. Special thanks also to friends and family whose concern, calls and prayers gave us strength through difficult times. Funeral services will be private. Memorial contributions may be made to Catholic Campaign for Human Development/Catholic Charities NWO, 1933 Spielbusch Ave, Toledo, OH 43604, or a charity of the donor’s choice.

Richard passed peacefully on February 16, 2017 at the Elizabeth Scott Community, where he had resided for the past year. Richard was born to Anna and Alphonse Martel on January 12, 1930 in Manchester, New Hampshire. He graduated from St.... View Obituary & Service Information

The family of Richard A. Martel created this Life Tributes page to make it easy to share your memories.

Richard passed peacefully on February 16, 2017 at the Elizabeth...

Send flowers to the Martel family.